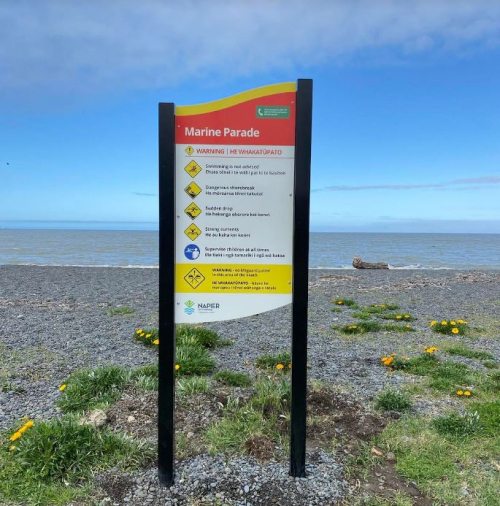 In readiness for what is forecast to be a busy summer season, permanent water safety signage is being installed along Napier’s Marine Parade, warning of dangers in the water and foreshore.

The sudden drop-off at the shore line is well known by locals as high risk but with visitors flocking to the Bay over the summer and cruise ships arriving back in port it’s vital the risks are flagged as loudly and clearly as possible, says Acting Chief Executive Richard Munneke.

“Installation of permanent signage is an important step to making the waterfront a safer place for everyone to enjoy.

“It is vital these safety messages and warnings are understood and shared far and wide, and we are grateful they are consistent with the rest of the country’s beach safety signs, thanks to the input and expertise of Surf Life Saving New Zealand,” Richard says.

Installation of the permanent signs will begin this weekend and will replace temporary signs that were placed along the stretch of Marine Parade last December. Additional signage will be installed at Westshore, Port Beach and Bay View in due course.

The permanent signage comes as a result of a Marine Parade Water Safety Signage Report, a component of a wider Coastal Risk Assessment carried out by Surf Life Saving New Zealand, which has made recommendations based on the local environment and geographical landscape.

The signage is based on Surf Life Saving New Zealand’s Guide to Beach Safety Signs in New Zealand, which sees standardised signage throughout the country.

As well as the permanent signage, the trial of public rescue equipment at sites along Marine Parade, funded by New Zealand Search and Rescue (NZSAR), will also continue. These devices are intended for ‘dry rescues’ to be thrown to a person in the water to assist them until emergency services arrive.

Napier City Council will also resume its water safety campaign highlighting the dangers of swimming and playing at the water’s edge along Marine Parade, on radio and social media. Locals are encouraged to share the information with whānau and visitors from out of town.

“The ocean can look calm but under the surface there is a steep drop-off, strong undertow and unpredictable waves. The stones on the water’s edge can also be unstable under foot and it is very easy to be knocked off your feet. It can be really dangerous and extremely difficult to exit the water.

“This is a timely reminder ahead of summer to take heed of safety advice and do not swim along Marine Parade,” Richard says.

“If you see anyone in trouble, call 111 immediately and ask for Police. And at all times, swim between the Surf Lifesaving yellow and red flags.”