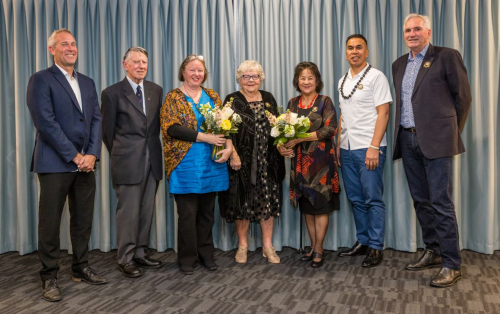 It takes a special kind of person to willingly commit their precious time and energy to improve the community they live in.

One such individual is Mark Cleary who has been awarded The Civic Award for Meritorious Contribution to the Napier community, an award that recognises people whose efforts are beyond exceptional.

Mark is a relentless ambassador for rangatahi who face challenges and barriers to gaining an education. He cares deeply about inequity, and helping people to help themselves.

Rather than retire after a long and fruitful career in education, Mark continues to advocate for others.

“Solutions lie within communities and this has been reinforced for me with the development work I have been involved with. The only way for initiatives to be successful is to build capacity from within” says Mark.

Alongside Mark, seven hardworking and humble heroes have been honoured at the 2022 Napier City Council Citizens’ Civic Awards Ceremony, held at the Napier War Memorial Centre on Wednesday evening.

The Civic Awards are an opportunity to celebrate and thank those selfless people of Napier who perform exceptional voluntary service in the community.