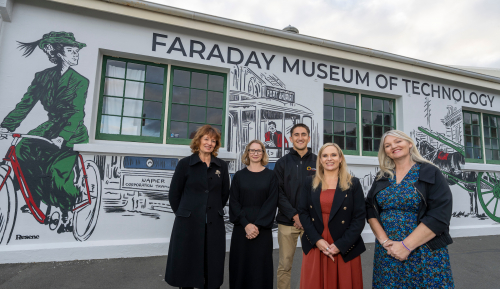 A new mural gracing the exterior of the Faraday Museum of Technology transports the viewer into Napier’s past, as well as providing visual clues to what lies inside.

The history laden mural and a storyboard detailing the past and present of the nearly 110-year-old building, the former Napier Power Station, were recently officially unveiled.

The humble horse and cart, 20th century tram and other colourful images have really captured the attention of passersby, says Manager Sharyn Phillps.

“Many people have been using the mural as a backdrop for photos. It really has brought the Faraday to life,” she says.

Artist Christie Wright, who also works at the Faraday, has painted the mural, along with several others at the interactive museum. One of her more recent ones features a traction engine, now based in Havelock North but a regular participant in Napier’s Art Deco Festival. It was once part of the Faraday’s exhibits, and its current driver is a Faraday volunteer.

Local electricity distribution and fibre optic network provider Unison has sponsored three of the Faraday’s paintings, including the new mural, and the storyboard. Resene sponsored the paint for the artworks.

Unison has a historic connection with the Faraday and is proud to have supported the project, says Danny Gough, Relationship Manager at Unison.

“It is excellent to see how the murals have come together to bring that historic connection to life, celebrate our technology and play tribute to the local heritage of Napier,” Danny says.

The building was originally owned by the Hawke’s Bay Electric Power Board (Unison) before being sold to the NZ Defence Force in 1991.