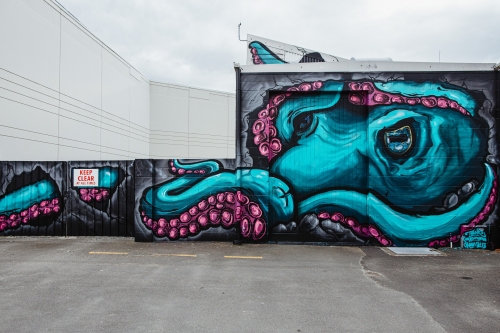 Purple and teal tentacles have taken over a water pump station in Greenmeadows thanks to a street artist and his school children collaborators.

Sam Savage has been on site for two weeks bringing to life the 12 metre by 5 metre giant octopus inspired by drawings from Greenmeadows School students.

Napier City Council saw the potential of the blank walls of the pump station earlier this year and invited Savage to make it a landmark.

Savage used the opportunity to pay homage to the importance of caring for what lives in the ocean.

“You only need to see what we have living in there and how beautiful these creatures are,” says Sam. “We need to look after them.”

The process of working with school children – Rooms 12 and 13 at Greenmeadows Primary School – inspired Sam, although the space itself dictated his final design.

“This long wall just lends itself so well to the tentacles and I could just see them flowing along here,” he explains.

“The kids drew me lots of sea creatures and what they saw in the water, and the one I really liked the most was the octopus,” says Sam. “I wanted something that was going to be loud and fun and just brighten up the area.”

Mayor Kirsten Wise is a big fan of the new addition, especially for the deeper message it represents.

“It’s a long way from Greenmeadows to the sea but Te Wheke will act as a reminder to everyone that waterways go straight to the Ahuriri Estuary and to the ocean. To look after the sea, and everything that lives in it, we must look after the waterways,” she says.