NCC works with others to address community safety 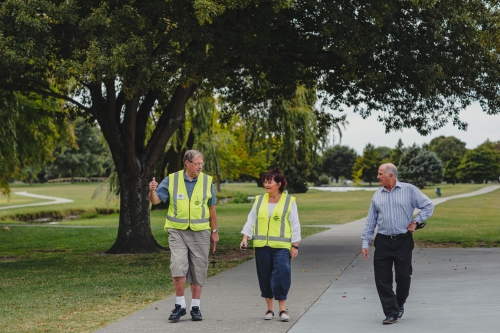 The results of Napier City Council’s recent community safety survey show residents’ concerns match our own, and validate the work already underway to address these concerns.

An overview of the survey, and key findings, will be discussed at next week’s People and Places committee meeting.

One of the aims of conducting the survey, in February, was to gauge perceptions about safety to help with the development of the community safety options as part of the Long Term Plan (LTP) 2021-31 consultation, given it had been consistently identified as a priority through pre-LTP engagement in mid-2020.

Council is due to confirm next week at the adoption of the LTP that the development of a new City Ambassador programme for Napier will continue, in conjunction with a replacement of the existing CCTV network.

If approved, this programme would start on 1 July, 2022. The current CBD patrols will continue until then.

Our focus is on making sure our public places are safe, says Napier Mayor Kirsten Wise. “We do this in many ways, from taking safety into account when designing and maintaining our spaces, to supporting our people, to being the coordinator of Safer Napier, a collective of more than 40 organisations all focused on a safe and healthy city.”

As a new CE, Dr Steph Rotarangi backs projects that are collaborative and make the most of the resources and strengths we have as a city.

Currently Council invests $350,000 a year into commuity safety initiatives, working closely with police and other agencies. “Concerns about safety have come through loud and clear in our survey and we need to act, along with working together with our partners to to not only improve people’s feelings of safety, but actual safety.”

The other aim of the survey was to inform reaccreditation of the Safer Napier programme later this year. Napier first became an accredited International Safe Community in 2010, and was reaccredited in 2015.

Why did you conduct a Community Safety Survey?

Aside from informing development of one of our key Long Term Plan consultation topics, we wanted to find out community perceptions, current concerns, see how aware people were of current safety initiatives, identify potential improvements, and measure awareness of the Safer Napier programme.

How many people were surveyed?

When did the survey take place?

Between 3 February and 2 March this year.

How safe do people feel?

The presence of people they trusted and strong social connections, particularly with neighbours, were important in all situations.

What about existing safety initiatives?

Residents were asked to rate the importance of six existing safety initiatives. On average, they were rated similarly by residents, whether they felt safe or less safe.

What are people worried about and what do they suggest may help?

Gang activity was the leading safety concern (55% of respondents). They were asked for suggestions for improving safety, other than ‘more Police’, and 84% responded, the most common being ‘get rid of gangs/ban gang patches’ (27%), followed by more CCTV/security cameras (27%).

Why don’t you just ban gang patches from public places?

Whanganui District Council introduced a bylaw banning gang insignia in all public places in 2009, however a High Court ruling deemed this to be unlawful and invalid.

What are Council roles and responsibilities when it comes to safety?

acceptable activities that maintain safety in all public places.

We must ensure our transport systems are safe, parks, reserves and open spaces are well

maintained and designed, and define routes allowing people to move safely with good

We contract security to keep communities, infrastructure and facilities safe, and work

We fund a number of safety activities, and are either involved in or lead several of these.

What else does Council do in relation to community safety, besides coordinating Safer Napier?

We invest in initiatives including Surf Lifesaving, Napier Community Patrols & Neighbourhood Support, and help fund community led ones such as rangatahi programmes providing pathways into education and employment.

We’ve also developed and led awareness and behaviour change campaigns about begging in the CBD and Marewa, encouraging people to give to those who can help beggars or rough sleepers such as Salvation Army.

Any other plans besides the Ambassador programme and modernised CCTV network?

We will be carrying out a city safer pathways review, to identify and create safe well lit routes from the main CBD to the main parking areas for business and retail employees.

We have a number of regulatory controls and initiatives that contribute to the overall safety of Napier residents, but there are several agencies and community leaders with important roles to play.

We are only one part of the solution.