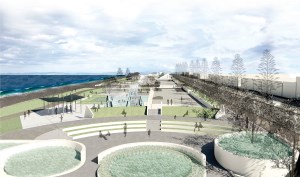 The next stage in the re-development of Napier’s iconic Marine Parade got a step closer yesterday when the Napier City Council City Development Committee approved the proposal going out for public consultation.

The proposal includes a fun and interactive water play area, known as the Reef Garden, a grassed amphitheatre area connecting the Sunken Gardens to the new Reef Garden, and a recreation facility incorporating the existing Marineland site.

Napier City Council City Industry Development Group chairman Keith Price was pleased the project had been approved for consultation. “The group and Council have been working on this project for a long time because Marine Parade is such an important part of our city. Now we need the community to tell us what they think.”

Council believes the proposal will provide a multi-purpose recreation facility for locals, be attractive to visitors to the city, and be a strategic and cost-effective use of Marineland infrastructure.

Up to $5.7 million will be required for the project, through to 2016, of which some will come from rates, and the remainder expected to come from external funders.

The council will be accepting feedback on the proposal from Saturday (18 October) through to 19 November. A hearing for those submitters who wish to be heard on their views will be held on 4 December, and a final decision on the proposal is expected by Christmas.

Hard copies of all documents will be available at the Napier Libraries, and at the main Council reception.