Who are our unsung heroes? 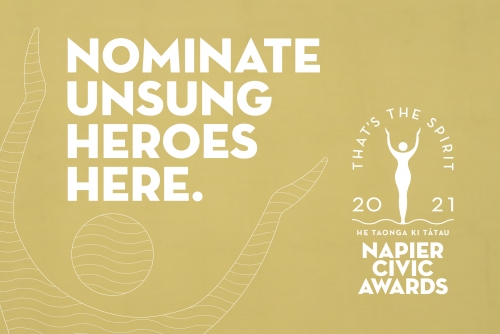 For over 40 years Gary Macdonald has been an active volunteer for Hawke’s Bay Rugby. After starting as a young player, he then began volunteering by putting out signs, selling tickets and assisting with ground control. He now holds the position of Match Manager, where he leads and delivers a group of 100 volunteers on every Magpies and Hurricanes match.

As a winner of a 2020 Napier Civic Awards, Gary encourages anyone who knows a hard-working volunteer to consider putting their name forward. “There are plenty of volunteers out in the community who don’t work for recognition, but are deserving of a Civic Award.”

Nominations open today and close at 12 noon on Friday 9 April.

The Napier Civic Awards were established 44 years ago to recognise people who have given exceptional voluntary service to Napier. While traditionally it has been the older generation who is nominated for the awards, the judging panel is encouraging people to also think about younger unsung heroes who demonstrate community spirit and service to the people of Napier. Decades of accomplishments is not compulsory.

Winners from the past few years have volunteered in a variety of ways across a wide range of organisations, including Hawke’s Bay Rugby, performing arts, the Returned Services Association, Trade Aid, St John Ambulance, Meals on Wheels, KidsCan, Red Cross, Napier Community Patrol and Scouts.

For further information about the awards, or to fill in a nomination form, go to - Civic Awards