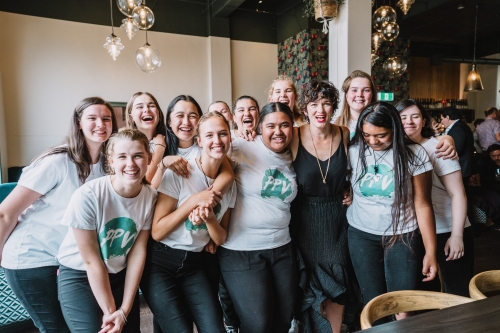 Julia Deans, in black, pictured with some members of this year’s Project Prima Volta

The past decade has seen Julia transition from sassy rock chick to glorious songbird, including making her debut operatic performance as Lola in Festival Opera’s Cav + Pag.

Deans has also worked with Neil Finn, The Adults and SJD, performed in arts festival shows paying tribute to the likes of Joni Mitchell, David Bowie and Jacques Brel, and worked with the Auckland Philharmonia and Christchurch Symphony Orchestras. This year she was invited to be the Musical Director of the Silver Scroll Awards show.

The gifted young artists that make up Project Prima Volta (PPV) will once again provide a mixture of music, from operas to pop.

PPV, which means first time in Italian, is a weekly run mentoring programme for young people from all over Hawke’s Bay, with a focus on finding voices and shaping futures through music.

PPV has for the past few years collaborated with Festival Opera for its annual production, usually held every February during the Art Deco Festival. Next year’s production has unfortunately had to be postponed, due to the pandemic.

They will be followed by The Tramps, a great group of local musicians who are also performing at the New Year’s Eve concert at the Soundshell.

Botanic Beats, which will run from 6pm to 8pm, has been a popular addition to the free events Napier City Council organises for the community. This event is supported by New World Greenmeadows.

“Having a singer of Julia’s calibre here adds something special to what has become a popular summer evening event. It’s a great use of this garden space and we hope to see even more people come along this time,”says Kevin Murphy, Event Manager, Napier City Council.

Coffee and food will be available for purchase at Botanic Beats, or you can bring your own picnic to enjoy along with the music.