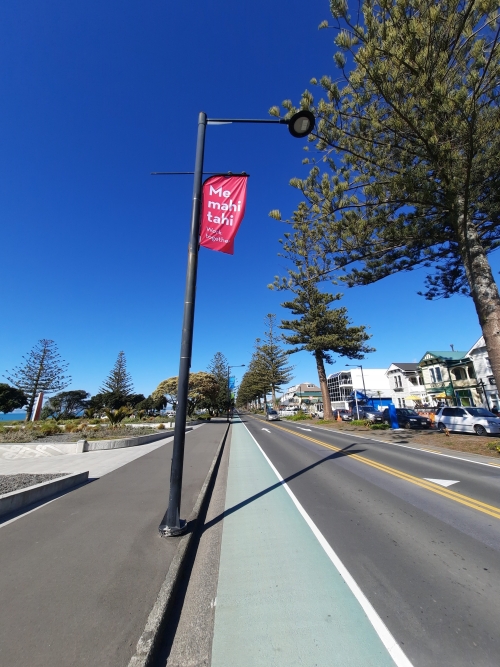 A regional collaboration was proposed by the Wairoa District Council’s Pouahurea Māori, Duane Culshaw, who says the new bilingual flags feature 10 different kīwaha, or common phrases, that are easy to use in everyday conversation.

“The Wairoa district has been doing this since 2013, and now it’s great to see the other Councils doing more and more to promote te reo Māori in the workplace and in public. It’s a real win and great for the community to see and hear te reo Māori used naturally in public places,” he says.

“Some people are scared they might offend Māori by mispronouncing the language. But giving it a go is what Te Wiki o Te Reo Māori is all about.”

“The kīwaha are for all people to use every day, not just Māori. For example try saying tau kē, instead of well done, to your workmates, family and friends,” says Mr Culshaw.

He says it was important to ensure that the kīwaha were consistent throughout Hawke’s Bay.

“For example, if you see ‘tau kē’ ‘well done’ in Wairoa, you will also the same phrase in Waipukurau,” he says.

Mr Culshaw says it gives him a great sense of pride to see all the Council’s in the region following Wairoa’s example in flying the bilingual flags.

Māori will always support people trying to speak the Māori language, he adds.

“We have a great appreciation of people who try to speak te reo Māori. It’s okay to be shy and make mistakes. All I can say is give it a go,” says Mr Culshaw.

Wairoa Mayor Craig Little says using bilingual phrases are what the town does naturally. “I’m proud they’ve served as an inspiration to the rest of the region, and possibly the rest of the country. Don’t be afraid to use te reo Māori where ever you are”.

Napier City Council has its bilingual flags flying along Marine Parade and around the Ahuriri estuary.

“Flags with simple yet powerful meanings such as the ones we now have on display in our city are a great way to show, as a Council, our support for Te Wiki o te Reo Māori,” says Napier Mayor Kirsten Wise.

“I’d really encourage everyone in the community to give the phrases a go, not only during Māori Language Week but throughout the rest of the year too,” he says.

Hastings Mayor Sandra Hazlehurst says te reo Māori is a special taonga which we must all help to nurture and grow.

“It shouldn’t matter if we cannot speak it or understand it.  As a region, we value te reo Māori and we all need to be committed to learning it and embracing it and I’m excited to see the flags up for Te Wiki o te Reo Māori.”

“I love sharing in Te Reo Maori in our communities and would to see and hear more people giving it a go! The flags will be a cool way for people to learn a new kiwaha – kai pai to mahi!”

The kīwaha will be seen and heard on social media and local radion stations throughout Te Wiki o Te Reo Māori.