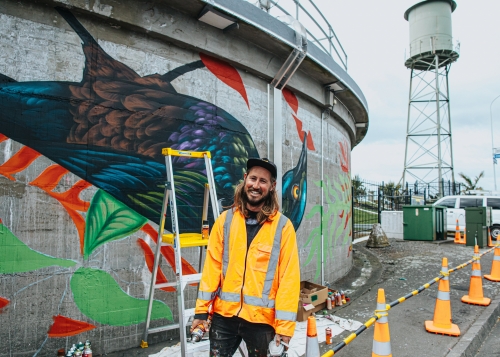 The Thompson Road reservoir on Napier Hill is on its way to being transformed from a water feature to a work of art – on the outside, at least.

Local artist Cinzah Merkens, renowned for his public works of art and involvement with the Seawalls: Murals for Oceans movement, expects to complete the mural sometime this week, weather permitting.

The idea to add some art to the area came from Napier City Council’s Infrastructure team.

Council wanted the community to play a part, and both local residents and Sacred Heart College students contributed.

Cinzah and the students workshopped the project, looking at the process of mural painting while researching ideas for the two concepts eventually presented to residents, who then voted for their favourite.

Both concepts incorporated elements of local history, with the one depicting flora and fauna being chosen for the painting. While most Kiwis will recognise the birds, there is also significance behind the plant life chosen.

“The mokimoki fern, which used to grow here in Napier, is woven throughout the mural. Local Māori used to forage for it, it had a beautiful fragrance. The huia is also another way of reflecting the past,” says Cinzah.

The paint for the mural, which measures approximately 96 sq m (or 29m wide by 3.5m high), has been generously donated by Resene.

“This mural is one of a sweep of placemaking projects planned for the next 12 months which will add life to our city. Placemaking involves the community from concept development to implementation, says Paulina Wilhelm, Manager City Development, adding that it is great to have the students involved in the development of this art piece and engaged in what Council does.

Council plans to install a storyboard explaining the meanings contained in the mural in the area in the near future.