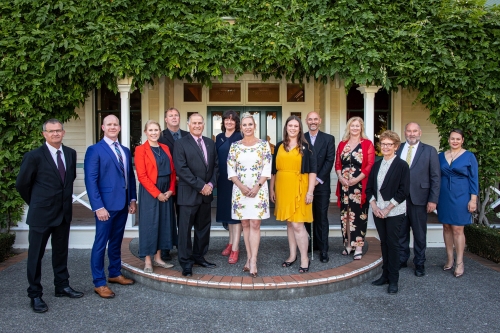 Napier Mayor Kirsten Wise is excited to be representing her hometown at such a high level, and to be one of three female Mayors in the Bay.

The results were known more than two weeks ago, but now it’s official.

Mayor Wise, and the Napier City Council for the 2019-22 term were sworn in at Mission Estate last night with an enthusiastic, happy crowd of family and friends in attendance for the triennial meeting.

Mayor Wise offered a “huge thank you” to everyone who joined them for the official swearing in. “This is a special occasion for all involved; the community who have placed their trust in us and voted us in, the staff who we will be working alongside, the family and friends who supported us throughout campaigning and of course the 13 of us who form the new council. I warmly welcome our incoming council and I’m looking forward to working together to represent our community over the next three years.”

It was also a big night for third term councillor Brosnan for another reason. Mayor Wise announced her selection as Deputy Mayor just under two weeks ago, and it was ratified last night.

Councillor Brosnan was first elected to Napier City Council with Mayor Wise in 2013. Having successfully worked together as councillors over the past two terms, Councillor Brosnan was looking forward to working alongside the Mayor and the new team to deliver on our shared community vision.

Councillor Brosnan is also Mayor Wise’s preferred councillor to chair the regulatory focused committee. The other preferred committee chairs are as follows: Maxine Boag, Graeme Taylor and Keith Price. The names of the committees are yet to be finalised.

These positions are expected to be confirmed at an ordinary meeting of Council this year.

The other resolutions passed last night covered legislation affecting elected members, confirming the date of the first ordinary meeting, and the voting system for confirming roles and responsibilities.