Positive Ageing Strategy - Have your say 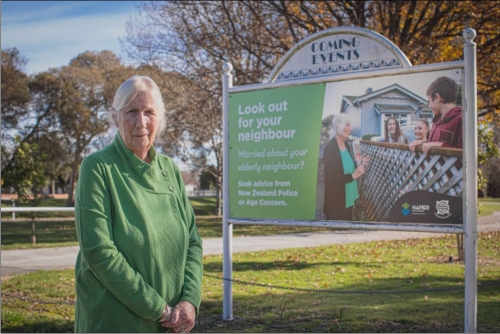 Helen Morgan in front of one of the billboards she features on, along with three of her real-life neighbours.

With Napier’s senior population growing, we've been working with others on how we can make our city work better for our older folk. We've come up with a draft Positive Ageing Strategy and we'd like to know what you think about it.

Napier's Positive Ageing Strategy 2019-23 (900 KB) was launched on Monday 29 July and is open for community feedback over the next month.

Napier resident Helen Morgan is excited to see the draft strategy and encourages people to respond with their feedback.

The strategy is being released alongside the Look out for your neighbour promotion which stars Helen and three of her neighbours. The promotion shares helpful tips from Police and Age Concern about how you can help older people who live alone in your neighbourhood. Looking out for each other is part of being a good neighbour, and it will become even more important as Napier’s population ages.

The draft Strategy identifies seven city-wide priority areas including Being Safe, Getting Around, Community Spirit and Being Informed & Involved.

A number of agencies contributed to the draft strategy. These include Hawke's Bay Regional Council, Hawke's Bay DHB, the Ministry of Social Development - and a host of community organisations who provide services to older people. It also has input from a reference group of residents with a lived experience of ageing.

Just over 10,000 people aged 65-plus live in Napier. By 2030, it's expected over a quarter of Napier’s population will be aged over 65. Remarkably - and for the first time in our history - our 65+ cohort will then outnumber our children.

Feedback on the Strategy is open until Friday 23 August. We're keen to hear from Napierites of all ages. Copies of the Strategy are available at Napier’s libraries, Customer Services Centre (215 Hastings Street), and online (900 KB). For more information, and to have your say, go to www.sayitnapier.nz.