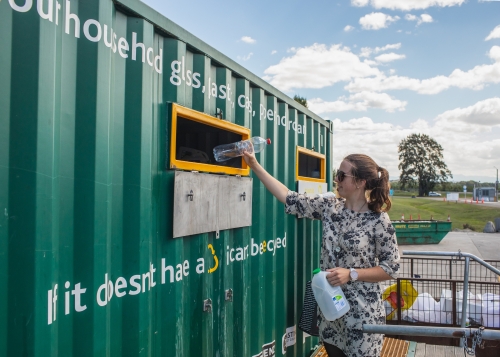 Water works and recycling are two of the main topics in this year’s Napier City Council Annual Plan 2019/20 consultation, which opened on Monday 8 April and runs until Monday 13 May.

Decisions by other countries to stop taking New Zealand’s plastic recyclables has had a major impact on what we can do in Napier and Hastings with this type of waste, and has also increased the cost.

The question for Napier residents and ratepayers in this consultation is whether Council continues to use its reserves to pay the higher kerbside recycling costs, or whether they would be happy to pay the full cost from the start of the next financial year, on 1 July.

The part-pay option, which Council prefers, would add $2.62 per week per household, while keeping the average rates increase for the 2019/20 year to 6.4%.

Council is also continuing to make improvements to the city’s drinking water network, and this has added $22 to an average property’s annual rates. As well as bringing forward projects which were outlined in last year’s Long Term Plan (LTP) 2018-28, three new projects have been added to the work programme for 2019/20.

Want to have your say? We're very keen to hear from you. Go to www.sayitnapier.nz to find out more - and to give us feedback. Our consultation period runs until noon on Monday 13 May.

“We want to know what people think of our plans for the coming financial year. It is no easy thing to meet the needs of the community and ensure our ‘business as usual’ duties are adequately funded and carried out, while not bringing greater hardship upon residents and ratepayers,” says Napier Mayor Bill Dalton.

People can also try out the online rates guide, to see the effect the proposals will have on their own property’s rates.

The other question which requires feedback is whether a Hawke’s Bay Disaster Relief Trust should be set up by the Hawke’s Bay Civil Defence Emergency Management Group. Establishing the trust will allow a fund to be built up as a charity before a disaster occurs, allowing the faster distribution of donated funds to those most in need when it’s needed.

Further information about this year’s consultation, the online feedback form and rates guide can be viewed at www.sayitnapier.nz, along with links to additional information about the changes to the LTP, and videos providing a look at water and recycling in Napier.

Council is taking a different approach this year, and is holding community feedback meetings, rather than the more formal hearing process.

Councillors and staff will be available to answer any questions about the changes, and take feedback, at the following places and times:

Napier and Taradale Libraries are also offering assistance to anyone needing help to fill in the online feedback form between 10am and 11am on Tuesdays and Wednesdays until 8 May.

The final Annual Plan is due to be adopted in late June.