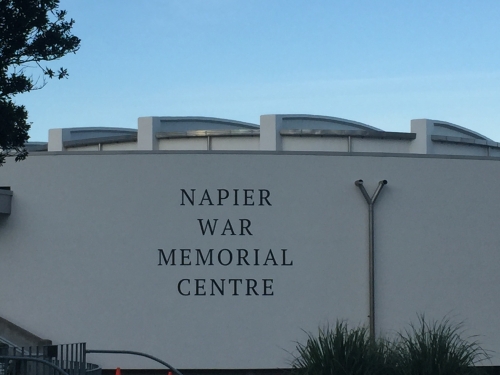 The design brief for the Napier War Memorial is expected to go out for tender by August.  The recommendation put forward by Councillors at the Strategy and Infrastructure Committee meeting two weeks ago set out a new design direction incorporating elements from all three designs that went out for public consultation last year.

A substitute motion, which clarified some of the points made in the original recommendation, was unanimously adopted at this afternoon’s Napier City Council meeting.  It was noted in the report to the Council meeting that given the complexities of the direction given by the committee, particularly the incorporation of the perpetual flame into the existing building, and other project priorities, there wasn’t the capacity to complete this work in-house.  The time frame for completion of the design will be dependent upon completion and acceptance of the tender and the development of a design concept which will be brought back to Council for final adoption.  A detailed design to enable construction to commence will be dependent on timings of Council accepting the design, and consideration of any further consultation, should that be required.

The resolution adopted by Council, is as follows, that Council:

a.   Considers the community feedback,

b.   Reconfirms its decision made on 27 September 2017 to locate the War Memorial at the Floral Clock site, and

d. That Council staff take the following direction to create a revised community-led design concept for adoption by Council;

e.    Note Council’s intention to tender the development of a revised concept no later than August 2019, and tender construction as soon as practicable in the 2019/20 financial year.

f.     Notes Council’s existing budget for this project and provides guidance, for the purpose of tendering, that construction costs (excluding the remembrance artwork and all professional fees) to be up to $750,000.

Council also passed a recommendation to accept the updated final Roll of Honour, which now stands at 1058 names. The review of the Roll of Honour and research began in January 2018 as part of the War Memorial project to return the Roll and Perpetual Flame to the Napier War Memorial Centre site. The research found good and legitimate reasons for 15 names which were on the 1995 Roll to be removed.

The new Roll of Honour comprises war dead from the South African War, WWI, WWII, Occupation of Japan, and Vietnam.  The Napier War Memorial Centre building was extended in 2016. As part of this extension memorial elements were removed and stored pending a decision on a site for their relocation.

In July 2017 it was agreed between NCC and the presidents of the Napier and Taradale and Districts Returned Service Associations to establish the memorial in close proximity to the building. That September, NCC resolved to locate it at the floral clock site, and move the floral clock to the Sunken Gardens.

In June 2018 Council resolved to release three designs for public feedback.  The design that housed the elements within an annex to the building was withdrawn at the request of the designer. Subsequently a third indoor design option was offered by a member of the public, Craig Morley, to replace the annex design that was withdrawn, and in October Council amended its June resolution to allow this.