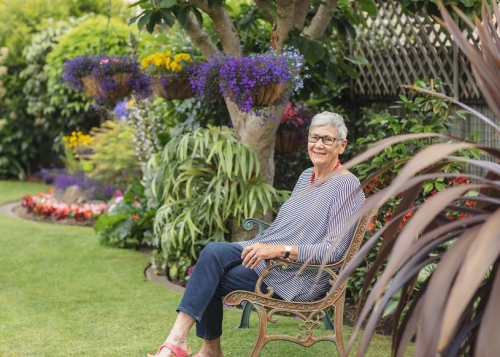 Yvonne Pitcher has always been a keen gardener, but never imagined her green-fingered tendencies would lead to awards – four years in a row.

This year her immaculately presented garden won the residential category of the 2018 Garden Competition, announced at the awards ceremony at the Greenmeadows Hall last Friday night (16 November).

What came next was definitely a surprise, she says. “I never expected this,” she says of being called up to the stage again to receive the Champion Garden cup and a massive bunch of flowers.

Her connection to the awards, run by the Spirit of Napier Lions Club with support from Napier City Council, began four years ago. A friend entered her garden in the Dob In A Garden category, and she was awarded second prize.

Yvonne Pitcher: “It's a lot of work, but I do think a lot more people should enter the awards. The real reward though, is being able to sit out here and enjoy it. It’s therapeutic.”

She has also placed before in the Entertainment and Newly-Established (under three years old) categories.

Most of the colourful plants, shrubs and garden features have been added since Yvonne and husband John moved to the property five years ago. John’s forte is the neatly tended vegetable plot and glasshouse.

Yvonne also does a lot of craft work, including painting, and dotted throughout the garden is some of her own driftwood garden art.

Yvonne’s favourite area is the fish pond and bridge feature. “It is a lot of work, but I do think a lot more people should enter the awards. The real reward though, is being able to sit out here and enjoy it. It’s therapeutic.”

Keep an eye out for entry forms for the 2019 Napier Garden Competition in October next year.