Who will be crowned this year’s best gardener?

Entries to the Napier Garden Competition, run annually by the Spirit of Napier Lions Club in conjunction with Napier City Council, are now open. 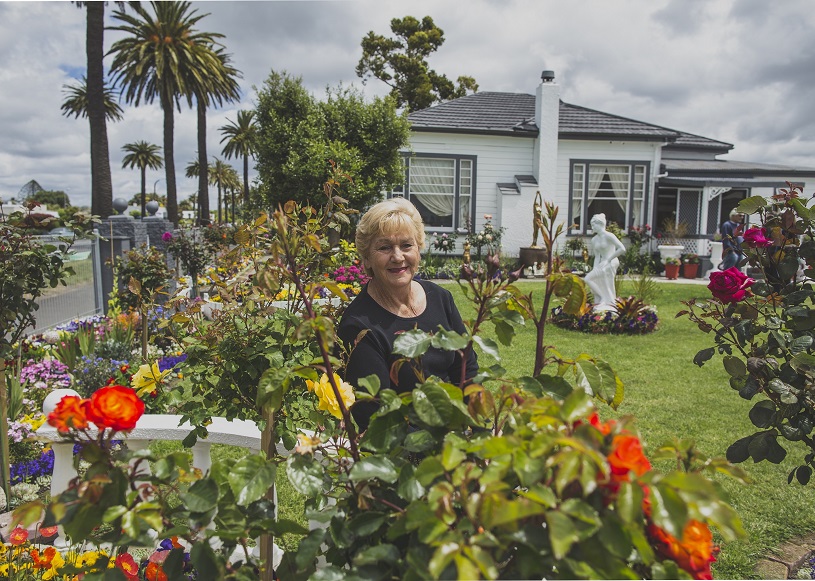 The 2017 winner Gloria Mauloni, who isn’t entering this year’s competition, modestly puts some of the continued interest down to being in a prominent location, on the corner of Kennedy and Wellesley Roads. “We’ve constantly had people saying how lovely it is, and we always invite them in to take photos.”

While no one can predict what the judges will be looking for, lots of colour and garden art has worked for Gloria and her husband Bob, she says.

There are 11 categories in the competition, including best first time entry, best vegetable garden, best outdoor entertainment area and “dob in a garden” – for those wishing to nominate a garden they admire that’s not their own.

The couple bought the property four years ago and it has undergone a major transformation. It has been a great spot to grow a variety of roses and colourful plants, she says, and to display Gloria’s collection of garden art, some of it upcycled from previous lives as, for example, a balustrade and bedhead.

The experienced gardener has lived in Hawke’s Bay for eight years, first at Waipukurau, where she learned how to create a garden to cope with decent frosts, and Awatoto, where salt spray was the challenge.

There are 11 categories in the competition, including best first time entry, best vegetable garden, best outdoor entertainment area and “dob in a garden” – for those wishing to nominate a garden they admire that’s not their own.

Entries for the Napier Garden Competition 2018 close on 31 October. Judging takes place on 5 and 6 November, and prizegiving will be held on 16 November. For more information, or to enter, go to www.napier.govt.nz #gardencompetition, or telephone the Spirit of Napier Lions Club on 06 844 0439.