An American couple - esteemed honorary Napierites - have made another thoughtful contribution to the city. 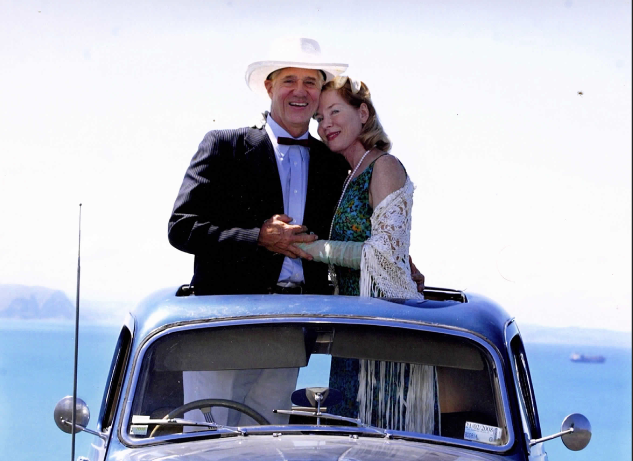 Phil Krueger and Judy Newman, pictured at Bluff Hill, Napier, in 2002 when they married.

The generosity of an American couple means over-65s who are SuperGold cardholders will be able to use the Napier Aquatic Centre for just $1 a time from this Saturday, 1 September.

Both being over 65 themselves, and on a fixed income, they appreciate how much a subsidy could help other seniors not as fortunate as they are.

In Texas, if you live in a school district and are over 65, you can swim, and use other athletic facilities, for free. In the past, Texas did not have many University teams and following the oil boom, developed high school facilities “to the max”, says Phil. “This has carried on to this day. We do pay high school taxes to support this, however.”

Phil Krueger and Judy Newman married at Bluff Hill Lookout in 2002. Says Phil, “We feel we owe much of our happiness to New Zealand and its people.”

“In 1994, we were specifically looking for a residence in Godzone. We looked near Auckland and Waihi Beach but when we hit Napier, we knew it was the place,” says Judy.

Phil swims at least three times a week, Judy at least once a week, and they met while swimming – but that’s another story.

They married at the Bluff Hill Lookout in 2002. “We feel we owe much of our happiness to New Zealand and its people,” says Phil.

They wanted to use some of their retirement money to do some interesting things for their adopted country. The subsidy for senior swimmers is the latest initiative they have put their money towards. Others include efforts to save kiwi via Cape, restoration of the old Napier Cemetery, on Napier Hill, and upkeep of Napier’s Botanical Gardens.

“Our seniors are an important part of our community, and thanks to the kind support of Philip and Judith, we can remove a key barrier for our seniors to be more active within our aquatic centre,” Glenn Lucas, Manager Sport and Recreation, Napier City Council.

Until Saturday senior citizens (65 plus) were paying $3.70 to use the Napier Aquatic Centre’s facilities.