i-SITE helping to save endangered kiwi

More than 200 kiwi have been released into the Kaweka over the past decade and a half. Two of our i-SITE team were lucky enough to release the latest duo. 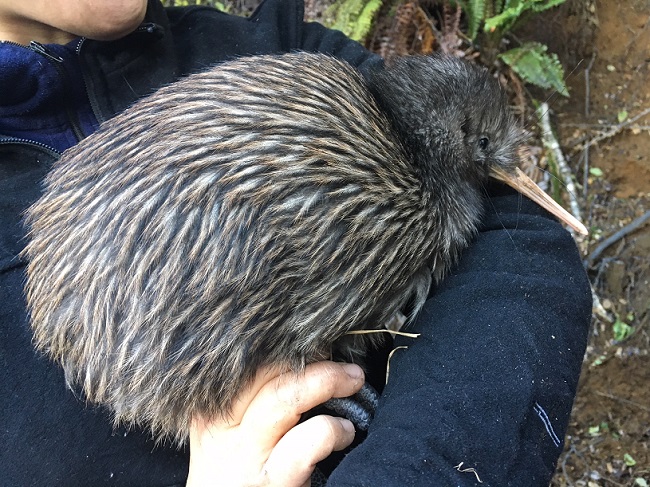 Mōhiohio, whose name means 'Information' was the latest kiwi to be released into the Kaweka.

Two Napier i-SITE Visitor Centre staff recently spent part of their weekend in the company of a very special bird.

The invitation to be part of the release of two kiwi chicks came about because the i-SITE collected donations to go towards ECOED’s Save Our Kiwi Hawke’s Bay programme during its annual i-SPY Fun Challenge in June - $900 in total. The i-SITE and Par2 MiniGolf now have collection boxes for the charity permanently installed at their receptions.

ECOED runs a Kiwi “creche” at Opouahi Scenic Reserve, near Tūtira, for young kiwi chicks. The chicks are then released into the wild once they reach between 900g and 1kg in weight. This is thought to be the minimum size at which kiwi have a fighting chance of fending off predators, such as stoats.

ECOED Charitable Trust's Kahori Nakagawa: "We have a small but dedicated team of volunteers, many of whom are over 60 years old, who donate thousands of hours of their time each year. They currently monitor more than 35 kiwi over 15,000ha of the Kaweka Forest Park, recover 20 to 30 chicks during nesting season, and transfer them to the predator-free Kiwi creche."

In recognition of the special partnership between the i-SITE and ECOED, Jane and Marion were asked to name one of the chicks. They chose Mōhiohio, Māori for information.

Helping to raise awareness of this charity and its important environmental work is very rewarding, says Jane. “Without volunteers ECOED would be unable to do as much as they do now. It’s great to support an organisation like this, and from the donations we received on their behalf at the i-SPY Fun Challenge, it’s clear other locals do too.”

Any donations are most appreciated, says Kahori, with ECOED relying on funding from Pan Pac, the Kiwis for Kiwi Trust and Department of Conservation.

The money raised from the i-SPY Fun Challenge will go towards the ongoing job of protecting and monitoring the wild kiwi population in the Kaweka. More than 200 kiwi have been released into the Kaweka in the past 16 years. “We have a small but dedicated team of volunteers, many of whom are over 60 years old, who donate thousands of hours of their time each year. They currently monitor more than 35 kiwi over 15,000ha of the Kaweka Forest Park, recover 20 to 30 chicks during nesting season, and transfer them to the predator-free Kiwi creche.”

Working in the Kaweka is not for everyone, says Kahori, with people sometimes having to walk for hours in rugged terrain and often navigating off track. “We’re always looking for fit and enthusiastic people to join our team.”

ECOED was set up in 2002 to promote outdoor education and kiwi conservation in the region. At the time, only around 300 kiwi were thought to be left in the Kaweka and would die out by 2050 due to predation by stoats, ferrets, feral cats, possums and dogs. Wild kiwi chicks are most vulnerable to predators and only 5% of them survive their first year.

For more information, go to www.ecoed.org.nz.