The rather wondrous Anderson Park Playground is now open for adventurous little Napierites. 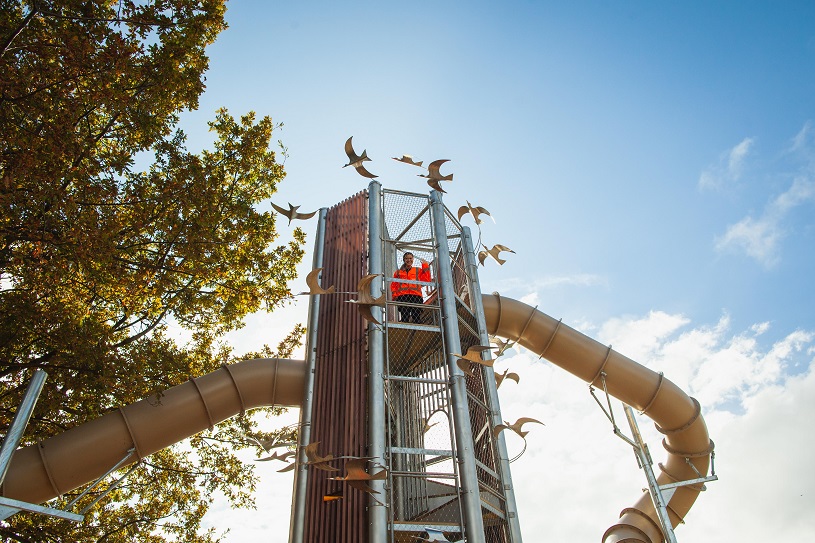 Let’s play! The Anderson Park Playground, which will be officially opened on Sunday, is open to the public now.

The Anderson Park Playground is now (unofficially) open - just in time for the second week of the school holidays.

The final touches to the playground have been finished a little earlier than expected, so Napier City Council has today decided to take down the fencing which has kept the public safe during construction. Some barriers will still remain, temporarily, protecting areas which are still a little muddy due to the on again, off again wet weather.

The official opening will still take place this Sunday 22 July between 10am and noon, provided the weather is kind, otherwise it will be held the following Sunday, 29 July.

A lot of work has gone into getting the mix of equipment for the playground just right, with plenty of stakeholder groups consulted about what they would like to see included, as the focus has been on creating a playground which caters for all ages and abilities.

These stakeholder groups have been invited to Sunday’s opening, along with those involved in the build: Boffa Miskell, McNatty Construction, Playground Centre, Playground People, Numat, PlayRope, and artist Ricks Terstappen, and near neighbours.

Also on site will be Milky’s Coffee, Bubbles in the Bay, facepainting by Meerlo Creations, the Hawke’s Bay Parents Centre, and a sausage sizzle, run by Tamatea High School students fundraising to get to a kickboxing competition in Bali later this year.

Mayor Bill: "It’s great that we’re able to give the community access to the playground earlier than expected. It’s a fantastic addition to a wonderful park, something to be enjoyed by many."

Councillors, YCON (Napier Youth Council) will also be attending, with Napier Mayor Bill Dalton looking forward to playing a lead role on Sunday. “It’s great that we’re able to give the community access to the playground earlier than expected. It’s a fantastic addition to a wonderful park, something to be enjoyed by many.”

Playgrounds such as those at Anderson Park are also commonly known as Destination Playgrounds, and are popular nationally and internationally because of the diverse range of experiences they offer families, people of all ages and abilities.

The new toilet block, which will open shortly, also includes an adult change table in the accessible toilet. The existing toilet block is still open to the public for now.

The Anderson Park Playground was originally proposed in the Long Term Plan (LTP) 2015-25. Following its popularity with the public who made submissions during that LTP’s consultation period, NCC decided to bring forward its construction date.