McLean Park's new hybrid turf is on target to be harvested and transported to Napier in July. 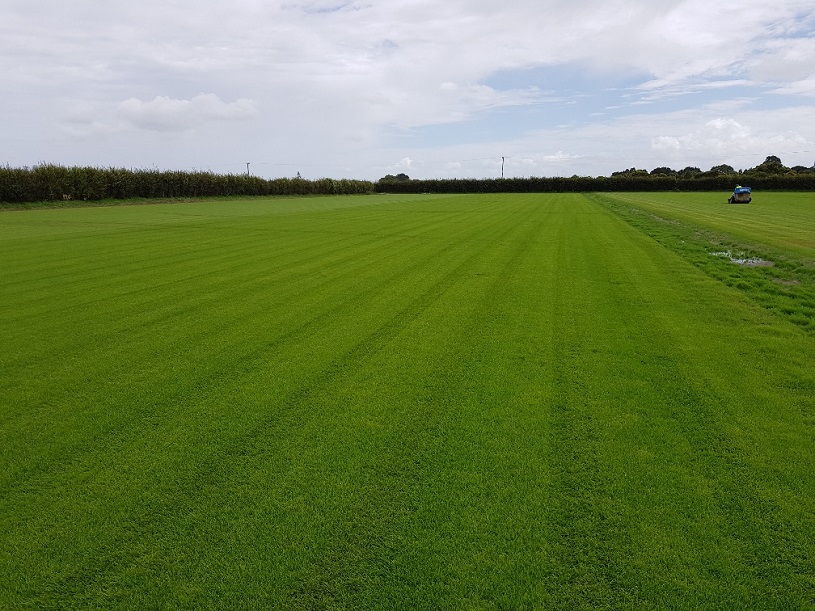 “Watching grass grow” has taken on a whole new meaning this week, as Napier City Council puts the finishing touches on plans to returf McLean Park.

Photos of new hybrid turf growing in a field south of Auckland have caused “a bit of excitement” at Council offices, says Chief Executive Wayne Jack, who adds that prolonged rain in the north of the country last month had staff concerned. “We are so heavily dependent on weather at all stages of the park’s redevelopment, from growing the grass to lifting the existing turf to harvesting and laying the hybrid turf, so we’ve all been keeping a close eye on the MetService website,” says Mr Jack.

Letters to residents of neighbouring Morris and Latham Streets have been distributed to advise of traffic changes and earth removal work that will be completed over the next few months. If the weather is good, the first sod will be removed on 9 April with the park scheduled to be returfed and reopened in time for the spring rugby season.

The high-tech hybrid turf is being grown in Pukekohe on a specialist backing. Artificial fibres are embedded in the backing to create additional strength. Plastic sheeting ensures that root growth is carefully managed, and the grass able to be harvested following its growth cycle.

“A hybrid turf means that we have flexibility in how we manage and use McLean Park,” says Mr Jack. “This is the same type of turf used at Optus Stadium in Perth, Eden Park, FMG Stadium and Westpac Stadium. It’s resilient enough to be able to host sports games, large-scale music gigs, and all sorts of community events.”

And the market is already responding to news of the state-of-the-art turf installation, with event organisers booking in to use the ground in 2019 and early interest from a major performing artist promoter.

NCC's Wayne Jack: “A fully reconditioned McLean Park will put us back on track for first class and international cricket, rugby, the global entertainment business, as well as Hawke’s Bay community events. We want locals and visitors alike to come away buzzing from the experience.”

Other improvements to the park include moisture sensors, improved irrigation and sub-soil drainage, cricket practice nets and a weather station. “The moisture sensors are particularly useful,” says Mr Jack. “Having them installed means we are able to irrigate selectively, which in turn means that shaded - and therefore wet - areas won’t be overwatered.

“We’ll also install reinforcements underground so our drop-in pitch crane can be brought in without impacting on the turf. And we’re embarking on a well-overdue signage and branding project so that our park is easily found and navigated.”

“The tender process established that the design we required in order to build a fully resilient and versatile ground was extremely complex, especially the drainage design, sub-surface works and integrated irrigation. Once the park reopens, we’ll be able to enjoy a host of benefits from this investment such as efficient and targeted irrigation and a ground that requires far less turnaround time between bookings.”

“A fully reconditioned McLean Park will put us back on track for first class and international cricket, rugby, the global entertainment business as well as Hawke’s Bay community events. We want our locals and our visitors alike to enjoy their time at the ground, and come away buzzing from the experience.”

With the Hurricanes v Sharks Super Rugby match on Friday 6 April, excavation work to a depth of 450mm will begin on the 9th, if fine weather holds.

The hybrid turf is due to be harvested and transported to Napier in July.