Library opening at MTG next Wednesday

The books are almost all shelved and in place, ready for the reopening of Napier Library. 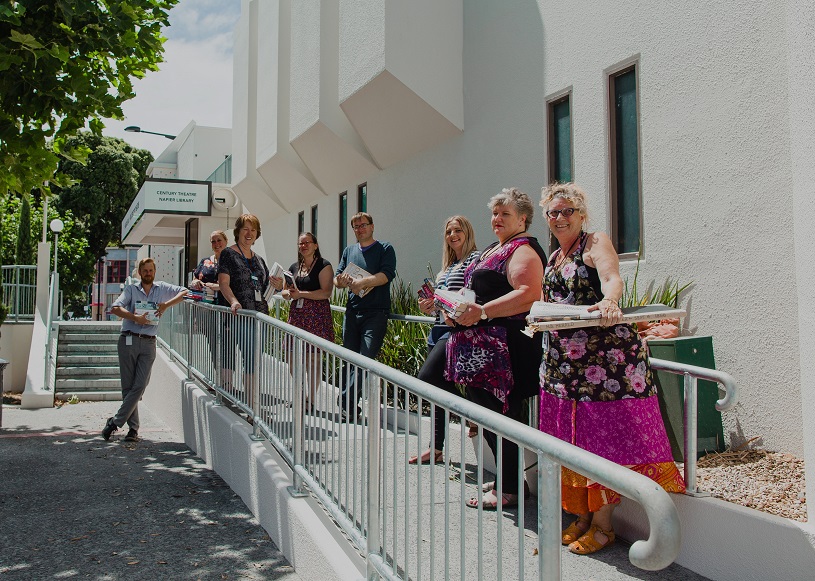 The shelves are being filled, the furniture is being moved into place and other finishing touches underway for the reopening of Napier Library at MTG Hawke’s Bay next Wednesday, 7 February, at 9.30am.

A special event is being held for the Friends of the Library and key stakeholders before the doors open to the public. The most direct access to Napier Library, which will be located at the rear of MTG on Herschell Street, is via a new ramp leading into the Century Theatre foyer, the connecting hub between the library area and the rest of the building.

“The staff at MTG are looking forward to the opening next week. It will be the realisation of a lot of planning and hard work over many months. We’ve been really impressed with how smoothly the transition has gone so far, and how collaboratively the teams from both MTG and Libraries are working,” says Laura Vodanovich, MTG Director.

To provide opportunities for people to use both the library and MTG, both facilities will be open from 9.30am to 5pm daily. Taradale Library hours will remain 9.30am to 5.30pm weekdays, and weekends 10am to 4pm.

MTG's Laura Vodanovich: "We’ve been really impressed with how smoothly the transition has gone so far, and how collaboratively the teams from both MTG and Libraries are working."

From next Wednesday, items from all library collections will be available to reserve, and will be able to be collected from either Napier or Taradale Library within two working days of the request. Items can continue to be reserved online.

Napier Library, along with Napier City Council staff from the Library and Civic buildings, have been moved to temporary locations after a seismic strength report, released last June, found the Library building achieved just 15% of New Building Standards (with the Civic Building rated 10%).

Other changes related to Napier Library which have happened since the decision was made to temporarily re-locate to MTG include: fees to reserve items being removed, and book drop off points being established at MTG Hawke’s Bay, Kennedy Park Resort, National Aquarium of New Zealand, and Pak ‘n’ Save Tamatea. Long term use of the alternative book drop-off locations, set up during the closed period, are being reviewed, as they have been very popular. They will remain in place until at least the end of March.

The extended loan period has also been very popular, so Napier Libraries is considering repeating it for next summer’s holidays.

Free bus transfers to MTG Hawke’s Bay/Napier Library are available, within 90 minutes of the purchase of the original ticket, from the Dalton Street bus stop to MTG using the Route 15 Ahuriri/Westshore/Bay View bus. This stops on Marine Parade, right outside the building. To return to Dalton St, the nearest bus stop is outside the Hawke’s Bay Club, on Browning St.