Caring for the community rewarded

She's been a Civil Defence volunteer for 25 years - and now Lesley Harrison is eyeing up the half century! 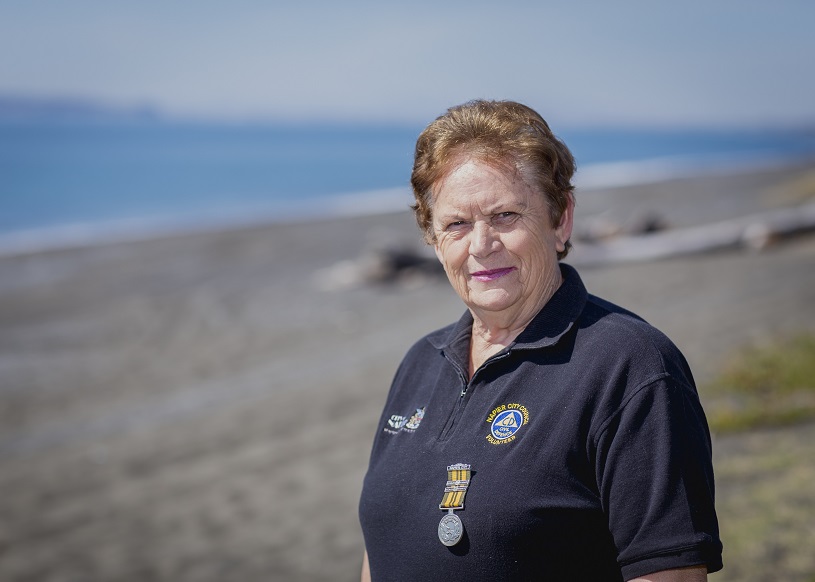 It was an offer to help with catering that set Lesley Harrison on the path to becoming one of Napier Civil Defence’s longest-serving current volunteers.

Mrs Harrison received her 25-year service award at the Napier Civil Defence Volunteers’ Award Night held at the Masonic Hotel, Napier, on Tuesday night (12 December). Awards were also given to 13 five-year volunteers, and one 15-year volunteer who was unable to make last year’s ceremony.

Mrs Harrison, from Bay View, was first introduced to Civil Defence by Tom Dacre and Allan Beattie, who ran the Civil Defence Centre then based at the King George Hall. The pair came to talk to the Bay View Women’s Institute - which she has been a member of for 37 years now - and asked if they could join the welfare team to provide catering if an emergency happened.

Civil Defence stalwart, Lesley Harrison: “If something happens and I get called out, I will always try to be there. There is so much still to learn, and as long as I am capable, I am happy to carry on.”

The invitation was accepted, and Mrs Harrison is now the last of the original Bay View welfare team still working with Napier Civil Defence, which is now coordinated by the Hawke’s Bay Civil Defence Emergency Management (HBCDEM) Group. “Twenty-five years shows admirable commitment and dedication to an organisation which hopes it never has to be activated, but Lesley has been called out a number of times and proven her commitment and ability each time,” says Marcus Hayes-Jones, Napier Emergency Management Officer.

Mrs Harrison is often found helping others – word did get around about her culinary skills – and she is still working as a home help.

The biggest event she has been involved with to date is the Napier Siege, in 2009. “Tom Dacre and I were among the first to arrive at Napier Intermediate. We were there on the Friday and through the weekend, and had the job of registering everyone who couldn’t get home, passing them on to the next section to find them accommodation, I was ever so pleased to have been able to put all our training into practice and it certainly paid off,” she recalls. “I’m very proud of the training I have done, even learning how to get people out of burning houses, which was not easy to do.”

Mrs Harrison has kept up her training. For example, she’s one person you could count on to set up an antennae and systems for a mobile communication centre in an emergency if there was no power. She’s only two papers away from a New Zealand Qualifications Authority Civil Defence Emergency Management Certificate. It is amazing what can be achieved with new technology, she says, adding that it still requires people to manage and provide the human touch. “If something happens and I get called out, I will always try to be there. There is so much still to learn, and as long as I am capable, I am happy to carry on.”

Volunteers are an important part of HBCDEM, playing a vital role in communities’ preparation for, response to, and recovery from an emergency. They train primarily to be Community Response Teams, but can also perform important tasks related to communication and information technology, and in rescue capability.