Napier South's Gloria Mauloni wins the big one in the 2017 Napier Garden Competition. 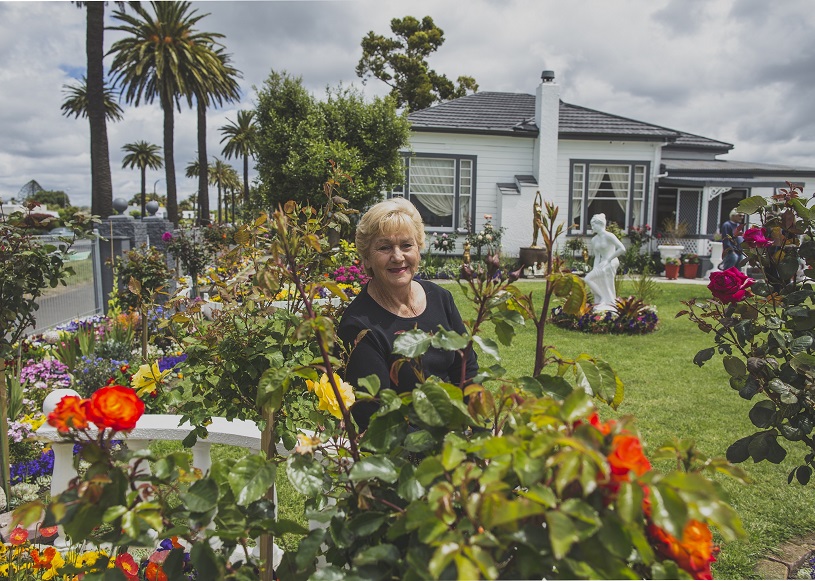 The Champ, her gloves off, takes a few moments to admire her hard work.

If anyone is looking for a great example of a complete property makeover, 1 Kennedy Road, Napier, fits the bill perfectly.

And now the time and effort that Gloria Mauloni has put into the gardens there has earned her the prestigious title of 2017 Napier Garden Competition Overall Winner.

The highly visible property, on the corner of Kennedy and Wellesley Roads, has undergone a major transformation in the three years since Gloria and her husband Bob bought it. “It took six months to clear the section before I could even begin,” she recalls.

While Bob is originally from Auckland, Hawke’s Bay has been home for seven years, first Waipukurau, where Gloria’s gardens had to handle a good frost or two, then Awatoto, where she learned to work with a lot of salt spray.

Kennedy Road has turned out to be a great spot to grow a variety of roses, something she has particularly enjoyed.

They also purchased the property next door, leading to some significant renovations there as well and new, albeit much smaller, gardens in the front. There are roses here too.

But there are plenty of poppies, hydrangeas and many, many more gems which makes each little section of their property pop with colour. Gloria says she can’t pick a favourite plant, or part of the garden, for that matter.

Garden Champ Gloria: “Without (husband) Bob’s support this would never have happened. He never asks ‘how much’ (are you spending), he never whinges if his tea isn’t cooked. I can be out in the garden until late at night - I completely lose track of the time.”

A keen bargain hunter, and lover of garden art as much as plants, Gloria has a knack for re-purposing what others might dismiss as junk. Among her bargains are a metal kiwi from a decommissioned adventure playground on the corner where the two roads meet, and a former balustrade and bedhead, painted a brilliant white and a nice contrast to the rich colours throughout the rest of the garden. Gloria also bought a hedge from Trade Me once – but it didn’t fit her plans so she pulled it out.

“Continually evolving” is a good way to describe the property. “Without Bob’s support this would never have happened. He never asks ‘how much’ (are you spending), he never whinges if his tea isn’t cooked,” she says with a laugh. “ I can be out in the garden until late at night - I completely lose track of the time.”

Gloria and Bob were fortunate to meet the late Napier identity Russell Spiller who was, for a brief time, a close neighbour. He was able to pass on some information about their house, a 1910 bungalow, and also made sure to point out the kauri growing in the southside garden. It is believed to be about 100 years old.

Gloria also likes to set up special 1930s themed displays for Art Deco Weekend. They’ve become quite accustomed to having people, many of them tourists, drop by to talk about plants, or take photos, not only during the festival but at any time of year.

Receiving praise from others was not why she entered the garden competition, however. She says she was encouraged by her husband, and Napier MP Stuart Nash, one of the locals who had noticed big changes in the garden.

“I didn’t enter it to win because the gardens make the house. But people do love them. I’ve had motorists tell me they get tooted at for getting distracted and waiting too long at the lights.

“I’m just fortunate to have so much land to be able to do this. It’s not only lovely for me but it gives others pleasure.”