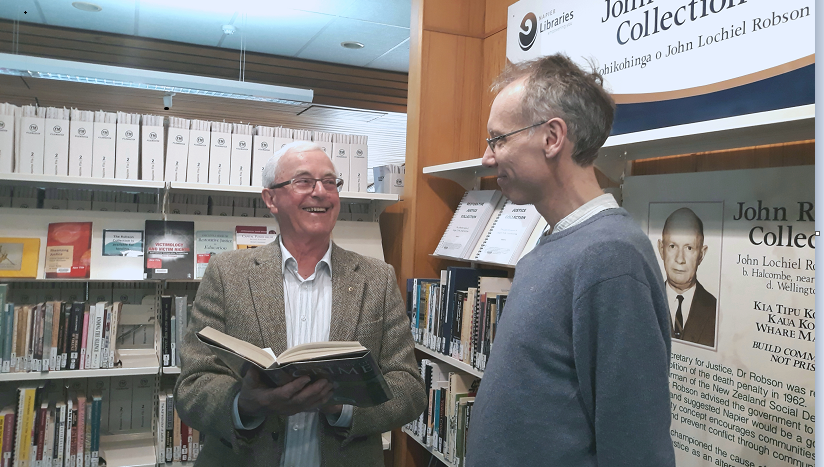 Judge Fred McElrea, left, and editor David Thompson during a visit to Napier Library on Thursday.

Taradale Library hosted the launch - and the cutting of the virtual ribbon - of the expanded and enhanced online Napier Library collection of Judge Fred McElrea’s pioneering restorative justice papers on Thursday (12 October).

Judge McElrea, now retired, is regarded as a pioneer of restorative justice reform, within New Zealand and internationally.

He initially became involved in restorative justice through his work as a Youth Court Judge, with what was then a new piece of legislation, the Children, Young Persons and their Families Act 1989, which introduced the family group conference procedure. “This struck me as a new model of justice, working on quite different principles to traditional adversarial justice which I saw at work in the District Court,” Judge McElrea recalls.

“What New Zealand has done is good, but is far from enough. We need to make court the backstop, not the mainstream way of doing justice. Restorative justice could have a big part in this and there would be great benefits, especially for victims, but including savings of taxpayer dollars.”

Judge Fred: "We need to make court the backstop, not the mainstream way of doing justice. Restorative justice could have a big part in this and there would be great benefits, especially for victims, but including savings of taxpayer dollars.”

He is pleased with the collection in the form it is now, and hopes others will take the opportunity to take this work forward, using the valuable research tools Napier Libraries has available. “What Napier Libraries has done is extremely important in advancing the public’s knowledge about restorative justice, and safety. The same is true of its wider John Robson collection.”

The McElrea papers date from 1992. The collection has been updated with the help of Auckland based editor and trained lawyer David Thompson. Now complete with a foreword by the “grandfather of restorative justice”, Professor Howard Zehr of Pennsylvania, the McElrea collection numbers some 80 papers, including work by others that his writings refer to, and some court judgments where he or others applied restorative justice.

On Friday, a further celebration of the collection and a brief introduction to it was hosted by Professor Chris Marshall, the currently holder of the Diana Unwin Chair in Restorative Justice, at Victoria University of Wellington.

To view the collection, go to: https://www.napierlibrary.co.nz/collections/judge-mcelrea-papers.