The Hastings based specialist concrete company which worked on the Bay Skate surface has won two national awards for its efforts. 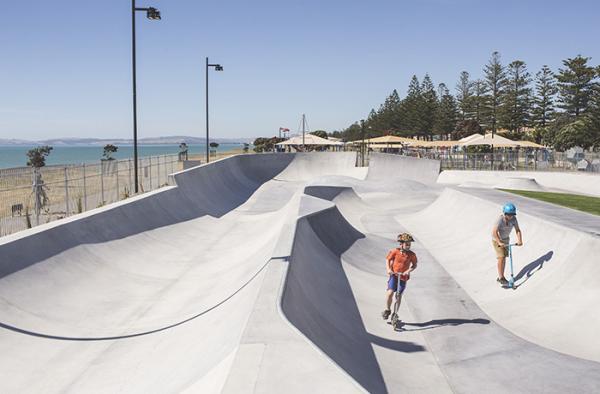 Angus McMillan and the team have plenty of experience building skate parks, having completed skate parks or bowls in various places around the North Island. Angus is currently working on a skate park in Palmerston North and will be heading to Tokoroa in January to do the same there.

“Bay Skate has been a great project to work on, because we enjoy working on things that are a bit different,” says Mr McMillan.

Angus McMillan Concrete’s work on the Napier City Council facility was described by the awards judges as containing many unusual forms, each posing unique challenges that required the company to “think outside the box”. “Transforming a well-known and much loved, but derelict site, into an amazing community asset, all while under an intense local scrutiny, is a huge accomplishment”.

It “ticked all the boxes” for the supreme award, the judges said, and was a testament to the important role played by the company in creating a built environment.

The company also won the Holcim New Zealand Environmental/Sustainability Award for its work on the Havelock North skate park.

Angus McMillan Concrete’s previous work with NCC includes building the penguin enclosure at the National Aquarium of New Zealand, and work as a sub-contractor for Gemco for MTG Hawke’s Bay’s build.