Renowned Hawke’s Bay based designer David Trubridge has been chosen to design the Perfume Point sculpture commemorating the 1932 sinking of a launch during which 10 men drowned. 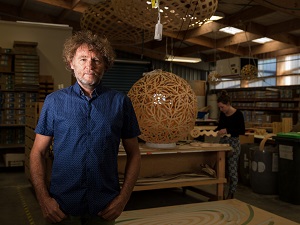 The Doris, which had 31 men on board, collided with a lighter, the Tu Atu late at night on 28 December 1932. Quick reactions from those aboard a nearby tugboat, the Coralie, and those onboard a lifeboat launched from the Tu Atu, meant most, but not all, were able to be saved.

Coming so soon after the 1931 Hawke’s Bay earthquake when the dead men’s families were still trying to rebuild their lives meant the sinking was a terrible blow not just for them, but for Napier.

Napier City Council (NCC) made an open call for artists’ proposals, and five artists came forward with their designs.

Sculpture will embody a boat form

Mr Trubridge says he and his team are honoured that their design has been selected. He says he felt the design should embody a boat form, as a vessel for the memories associated with the event, and as a way to link the land with the sea where the tragedy happened. “We want people to engage with the site and memorial and to see them exploring the story, thinking about what life was like on those launches cutting across the bay in the night. It's an opportunity for descendants to stand near where their ancestors would have been and to speak to them.”

The design is the pared back form of a boat, slightly abstract, evoking the skeletal remains of an old craft. The uprights will be built from recycled timber, hopefully from old wharves, which will make it look like it has been there for a long time. The deck will be made from new exterior grade hardwood for durability.

The site also has a special and very personal connection for the Trubridge family. “This exact spot, at the mouth of the Ahuriri harbour, is where I first entered Hawke’s Bay to take up a residency at EIT. We had sailed down from the Bay of Islands in our yacht. It was a chilly morning on April 1st 1991 and we were surprised to see snow on the ranges. We had to hang off and wait for daylight to enter the narrow harbour,” Mr Trubridge recalls.

NCC is supplying some funding for the commemorative sculpture, and would welcome any approaches from others interested in contributing to the cost of the work.

A fitting remembrance of the 10 men

In an article published last year, local historian Michael Fowler pointed out that the event was not widely known by the community, nor commemorated. He suggested Perfume Point Reserve, near the entrance to what was Port Ahuriri, off Nelson Quay, might be a fitting place for a memorial, and NCC agreed. “I'm pleased that the Doris tragedy will be commemorated with such a fitting structure. David Trubridge has captured the essence of the Doris project by creating an artistic connection to the sea where the drownings of the 10 men occurred,” he says.

NCC, Mr Fowler and members of the Old Customhouse Trust, Ahuriri, were involved in the selection process.

This will be the second major commission for NCC by Mr Trubridge, who designed Ecliptic, the Millennial Arch placed on Marine Parade to mark the start of the new millennium.