WHO official hosted by Safer Napier

An international representative of the World Health Organisation (WHO) was in Napier yesterday to check out the work of the award-winning Safer Napier programme. 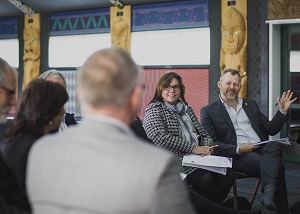 WHO official Jonathon Passmore, based in Manila in the Philippines, was hosted by the Safer Napier Strategic Group.

The Safe Communities model is internationally recognised by organisations such as WHO as an effective mechanism to deliver data driven and evidenced based interventions to prevent violence and injuries at community levels.

Safe Communities Foundation New Zealand (SCFNZ) Director Tania Peters accompanied Mr Passmore, Technical Lead Violence and Injury Prevention, Western Pacific Region, to see how Napier applies the principles of Safe Communities, is reducing injuries and violence at the local level, and how their experiences and lessons learnt might contribute to the global goals of violence and injury prevention as enshrined in United Nations Sustainable Development Goals.

"Safer Napier is a tremendous example of all sectors of society partnering to achieve common objectives of a healthy and safe community. Local leadership of evidence based and data driven approaches remain key to saving lives and preventing injuries in Napier," said Mr Passmore.

The visit included a welcome at Pukemokimoki marae, discussions with Safer Napier members such as Napier Community Patrol and the NZ Police, and finished with an afternoon tea hosted by Councillor Kirsten Wise at the Napier Conference Centre.

"It was an honour to be the only New Zealand community to win a 2016 WHO Award, which is fantastic recognition of the huge amount of work done by the Safer Napier network. We are pleased to be able to showcase that work to WHO in person,” said Councillor Wise.

Safer Napier tracks progress against an evaluation framework set by the SCFNZ.