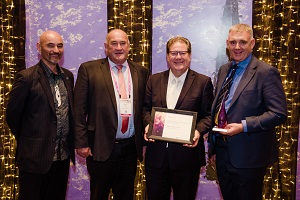 "The award shows we are heading in the right direction as a Council," says Richard Munneke, Director City Strategy. "It validates our approach involving the community, businesses, and other agencies, encouraging all ideas, not just our own and experimenting within a cutting edge urban design framework."

A number of pop-up spaces have been trialed, and other projects are underway. Successes include the Market St green space, Napier Night Fiesta, and Ping Pong Parlour, currently located outside the Napier Library.

NCC's open-mindedness and willingness to engage means the community and businesses are responding in kind, says Mr Munneke. Good examples are cafe Georgia on Tennyson's outdoor parklet, and container cafe Magnet, whose owners knew of City Vision and approached NCC with their idea of setting up a pop-up café on Marine Parade.

Soon, Council will be introducing bigger projects – drawing the new Marine Parade foreshore development into the city by experimenting with alternative road layouts and launching a lighting project to show off Napier’s magnificent CBD architecture.

Napier Mayor Bill Dalton says he's still on cloud nine following last night’s awards ceremony. "I'm thrilled that NCC staff and Councillors have been recognised for their hard work in this area. People tell me all the time how incredible the city is looking and that we should continue to be adventurous with our thinking. I was particularly pleased to see, in the report issued by LGNZ’s CouncilMARK assessors earlier this month, that they saw the City Vision as a very positive and progressive framework. It's this visionary approach to developing our city and the dedicated team behind that development that contributed to NCC receiving an A in the CouncilMARK assessment," says Mayor Dalton.

To find out more about the champion project, go to www.napier.govt.nz and search keywords #City Vision.