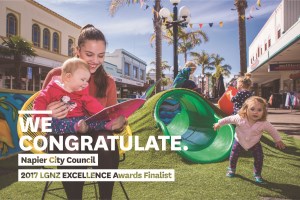 Now in their fourth year, the Awards recognise and celebrate the key leadership role that local government plays in communities around the country.

The project creates an overarching strategy that sets a direction and framework for new development and business ideas following the six principles:

The principle of being “open for business” has created a marked change in the way the council engages with the public, building community confidence in risk-taking and driving innovation. The council is now demonstrating open-mindedness and a willingness to engage and facilitate – and the community and businesses are responding with ideas, the pop-up Magnet Café being one example that may not have gained council support in the past.

Judges said the City Vision framework is an innovative programme that has the potential to transform the city in the long-term.

“It is aspirational and while the individual projects are small they will change the nature of the city. The council has involved a reference group and an expert urban designer, and are showing they are open to new ideas and to having new things in different places.”

LGNZ President Lawrence Yule said the finalists in the EXCELLENCE Awards showcased outstanding leadership being provided by local government throughout the country.

“Local government is at the centre of every community in New Zealand, helping shape the environment in which we work and play,” Mr Yule says.

“Being named as a finalist is a great achievement and reflects the vision shown by councils and the innovative work being done by staff. The finalists include some truly exceptional projects that are having a profound impact on communities.”

The 17 finalists in the LGNZ EXCELLENCE Awards 2017 are:

For more information contact LGNZ’s Communications Advisor, Joe Dawson on 022 524 1217 or by email.

About LGNZ and local government in New Zealand

The local government sector plays an important role. In addition to giving citizens a say in how their communities are run, councils own a broad range of community assets worth more than $120 billion. These include 90 per cent of New Zealand's road network, the bulk of the country's water and waste water networks, and libraries, recreation and community facilities. Council expenditure is approximately $8.5 billion dollars, representing approximately 4 per cent of Gross Domestic Product and 11 per cent of all public expenditure.