The recipients of Napier Citizens’ Civic Awards each year may at first glance be a diverse bunch, but there is one thing they always have in common.

None of these worthy volunteers ever e 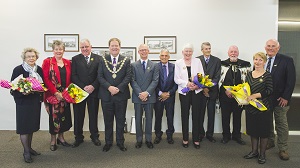 xpect any recognition or reward for their efforts, something two of last year’s recipients, Mike Madden and Erica Toomey, agree wholeheartedly with.

Nominations close on 30 June for the 2017 Napier Citizens’ Civic Awards. “Communities are dependent on volunteers and they don’t seek any recognition. If you have observed someone deserving of a civic award, please make them known to the Napier City Council award committee,” urges Erica.

Erica has great respect for the people she stood alongside at last year’s ceremony, adding that  they each showed a generosity of spirit, time and energy serving their respective organisations.

Her own background is in working as a court aide, helping countless families and individuals through the court process, and she has also been a long serving trustee of the Hawke’s Bay Addiction Centre Trust, which owns the Springhill Residential Addiction Treatment Facility.

Erica was also part of a group of Napier residents instrumental in Napier retaining primary care facilities in the form of the Wellesley Rd Medical Centre.

Mike and his wife Penny both received awards in 2016. They have been Art Deco volunteer walk guides, and are both long-term Cancer Society of New Zealand volunteers. Penny is a renowned artist and the Napier Pipe Band’s immediate past president, and a trustee of the HB Breast Cancer Trust.

Mike is a trustee of the Little Elms Charitable Trust, which runs a facility adjoining Hawke’s Bay Hospital providing accommodation and support to children and families receiving medical care. He is also a Napier Community Patrol member, carrying out extra duties as a “responsible person” that police can call on to sit in on interviews when a young person has no other appropriate adult available to support them.

“There’s no kudos in being on a committee - I think you get a passion for something and you don’t want to leave until you’ve taken it as far as you can go,” says Mike.

The Awards were founded 40 years ago. Recipients in the past few years have volunteered in a variety of ways and for a broad range of organisations, including Meals on Wheels, Trade Aid, KidsCan, Napier Repertory Players, Red Cross, St John Ambulance, Napier Community Patrol and Scouts.

The 2017 Award recipients will be announced in September.