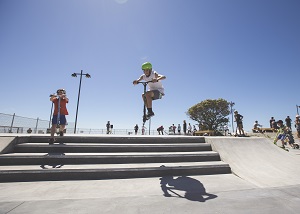 During April Bay Skate had 3340 riders and rollers through its doors, surpassing its daily attendance record four times and well above January’s total of 3000.

Bay Skate Manager Will Hanson puts Bay Skate’s popularity with all age groups down to a number of factors, including offering special programmes, word of mouth recommendations, being open after 5pm so riders who work or study can drop in, and a friendly inclusive environment.

The Bay Skate team, with support from clubs such as Skate Hawke’s Bay and Napier Sharks Inline Hockey, has been steadily adding to its list of services since it opened four months ago. These include Learn to Skate, free roller skating lessons held every Sunday, and the Little Rippers programme. Little Rippers, which offers free scooter lessons on Mondays between 5 and 6pm, and free skateboarding lessons on Fridays at the same times, is aimed at younger riders but all ages are welcome.

“It’s great to see our programmes gaining momentum and I’m keen to do more. Long term we’d like to put a Little Ripper team together to represent Bay Skate and travel to competitions around the country,” says Will.

Napier Sharks Inline Hockey is using the facility for training several times a week, and a few school groups from outside Hawke’s Bay have chosen to include Bay Skate in their activities schedule while visiting the region.

Bay Skate’s schedule continues to grow, with plans for more events in the near future, such as Saturday night roller discos, and end of term parties. However the biggest project currently on the go at the Marine Parade attraction is the design and construction of movable ramps.

Bay Skate engaged with its users, both on-site and via social media, to determine what would work best for each skater group and staff say it was a hugely valuable exercise. The great feedback they received has been taken into account for the designs, which are close to completion. Will expects the ramps will be in place in the second half of the year.