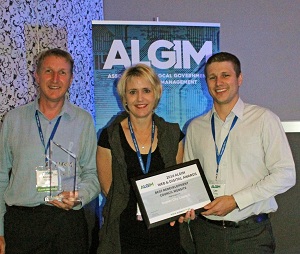 The award, announced at the annual Association of Local Government Information Management (ALGIM) Web and Digital Symposium awards ceremony, was the end result of much hard work from the Napier City Council’s website redevelopment team.

“They were given the task of transforming the website within a tight timeframe – and they achieved that with outstanding results,” Napier City Council Chief Executive Wayne Jack said.

“We’ve had fantastic feedback from the public and to receive this recognition from our peers in Government is the icing on the cake.”

Napier City Council was up against other redeveloped council websites, including Nelson, Timaru and Central Otago.

Judges said the redevelopment provided its residents and visitors with an easy to use, accessible and responsive site.

“Its design is easy on the eye and every aspect of its redevelopment has taken into consideration a customer driven approach with results to prove it.”
NCC web developer Lee Tong said he was pleased with the functionality of the new site.

“Our key stakeholders told us they wanted a site that was relevant and easy to use. That was our starting point and now it’s up and running, it’s nice to hear from members of the public that we’ve achieve those goals.”

The new-look site was re-launched in March and contains a range of new features including “responsive” design to enable the site to be read on smart phones and tablets, a comprehensive search engine powered by Google, improved “do it online” options, new imagery and a broad range of GIS mapping.