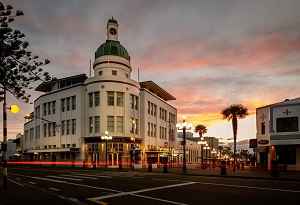 Napier City Council is embarking on a 'live study' in a project focusing traffic calming on the Marine Parade.

Marine Parade has long been Napier’s premier waterfront attraction, from the time Victorian-era ladies and gentlemen paraded in their finery, through both World Wars, and the resurrection of a new city following the earthquake.

Today its success as a destination for locals and visitors is impacted somewhat by the volumes, speed and size of vehicles that rumble along its route day and night.

The Marine Parade Traffic Calming project will see if a small change in the way vehicles are directed along a portion of Marine Parade has a positive effect on the use of this Napier icon by increasing the numbers of pedestrians, slowing vehicles, and encouraging heavy vehicle drivers to use alternative routes.

Many people have experienced the relaxed and carnival atmosphere when Marine Parade is closed to traffic for events. It would be nice if we could maintain this street environment year-round, however Marine Parade is an important part of Napier’s street network that needs to be accessible to cars, delivery trucks, coaches, and tourism operators. It also provides carparking, both for attractions and businesses along the waterfront, and for the CBD.

The City Vision advocates for the trialling of projects where temporary measures are possible. This ‘lighter, quicker, cheaper’ approach allows us to try things out before investing in more permanent and expensive infrastructure, and to be brave and have fun with design choices. It is an approach used both locally (eg, Tennyson Street parklet, Market Street Urban Oasis) and internationally, such as New York’s Broadway Avenue redesign.

The Marine Parade Traffic Calming proposal affects the area of Marine Parade between Vautier Street and the i-Site, and includes:

Other than the construction of the roundabout, which has already been part of Council’s work schedule for some time, and some changes to the median and on-road parking bays at the i-site end, all other changes are signalled using paint and signage only. Following the trial, if the project is deemed a success, then more permanent changes will be made to the streetscape, and may include widened footpaths, cycle lanes, paved pedestrian crossing points etc.

Benefits of this design may include:

Work on the roundabout is expected to commence in June 2017, with work completed around October 2017.

Our data collection for this trial will include:

How can I get involved?

We are gathering feedback from key stakeholders over design-related matters, but we’d love everyone to have a go at using the street layout before providing comment. This project is a ‘live study’ and feedback is collected while it is in place, rather than through consultation prior to any changes being made on the ground.