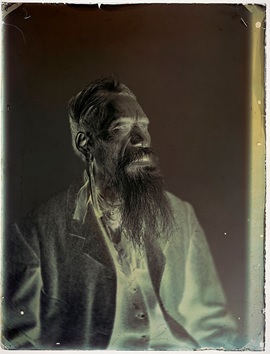 An historically and culturally significant series of art works is soon to be acquired by the Hawke’s Bay Museums Trust (HBMT), for display at MTG Hawke’s Bay.

Dr Richard Grant – chairman of the HBMT – says that the Ōmarunui photographic series by prominent New Zealand artist Jono Rotman is the most noteworthy acquisition the Trust has made in recent years.

“The Trust has not acquired artwork of this value for many years,” says Dr Grant.

“Art is sometimes bequeathed to us, gifted, or purchased – however as far as I am aware, this is the most significant investment the Trust has made.”

Ōmarunui is a series of photographs reflecting the events of what is commonly referred to as the one-day battle of Ōmarunui that took place on October 12, 1866. The Trust is delighted to have the opportunity to purchase the six images, five of which are taken of glass plate negatives housed at the Alexander Turnbull Library.

“The battle of Ōmarunui was a brutal marker in both our Hawke’s Bay and New Zealand history,” explains Dr Grant. “We were determined to keep these works in the Bay and not see them sold offshore.”

“We thank them all for their generosity in supporting the Trust, and allowing it the opportunity to acquire a work of real significance to Hawke’s Bay.”

“It is a very significant acquisition for MTG Hawke’s Bay and it’s a true community effort. This series also starts a conversation about the battle of Ōmarunui which we hope will lead to ongoing dialogue and artistic response,” says Ms Vodanovich.

Dr Grant paid tribute to the artist, Jono Rotman, Rotman’s local gallery Parlour Projects, and Gow Langsford, Rotman’s principal New Zealand gallerist, for contributing to the purchase, in order to ensure that the six works stay together. Rotman has strong ties to Hawke’s Bay – his matrilineal forebears came from the UK and settled in the region in the mid-19th century and his great-great-grandfather built a home adjacent to Otatara Pa in Taradale. Dr Grant acknowledged, too, that local iwi have supported the acquisition.

Rotman is well regarded as an artist who is fearless in his exploration of biculturalism, society and humanity. His Mongrel Mob Portraits series cemented his place in the international art world as a photographer of great merit and mana.

“Beyond my ancestral proximity, I feel the events in Ōmarunui are a microcosm of the wider tectonics of that period in the nation’s history and hold relevance to this day,” he says of his photographic series.

“Making the decision to support the acquisition of works so important to local hapū and Hawke’s Bay’s history was simple for Napier Port. This is one of a number of initiatives we are involved in to support local hapū in their endeavours.”

Dr Grant believes the Ōmarunui acquisition comes at the perfect time for HBMT.

“When considering the purchase of art works, the HBMT takes into account many factors including availability and rarity. If you don’t acquire art when it becomes available, you can effectively miss that chance forever. I spoke to several other museum directors around New Zealand about this opportunity and we all concluded that the series would be a fantastic addition to MTG Hawke’s Bay.”

The Trust is now working with the artist to fix a date for the works to change hands.

Ms Vodanovich says that MTG Hawke’s Bay is planning to publicly display the works from September.