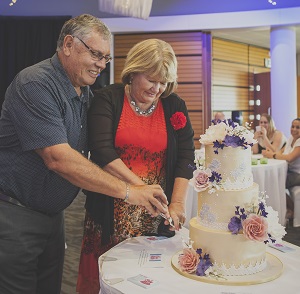 Gaye Clarke is looking forward to having a “second honeymoon”, thanks to winning a Napier escape package as part of the 21 Years of Brides campaign included in the Napier Conference Centre re-opening festivities.

Gaye, a mother and grandmother who has been married to Colin for 46 years, described the win as “very exciting” and said a romantic night away was well overdue.

She recalled meeting Colin aged 14, being engaged by 17 and married at 19, with their reception held at the former Napier War Memorial Conference Centre and photographs taken at the Sunken Gardens. The trick to a long and successful marriage? “Patience” says Gaye.

The fun campaign, run by Napier City Council in partnership with NZME (The Hits radio station), wrapped up on Sunday afternoon with a special High Tea in the newly refurbished and enlarged ballroom, catered by in-house caterers Dish.

The invitation to former brides to share their photos and stories proved popular, with over 50 entries in total.

The 21 years related to the 21 years which had passed since the Conference Centre’s last refurbishment in 1995, although there were plenty of entries from earlier times as well, and some very recent entrants. One was a Waipukarau based bride from September 2016 who moved her entire wedding to the conference centre with just three days to go, when her earlier venue was found to be unsuitable for her purposes.

For the trip down memory lane, entrants were encouraged to bring along wedding albums to share, and wedding dresses to display – even wear them if the mood takes them!

“We wanted this to be a special day for our brides. It’s a chance to say thank you to some of the people who have contributed to making the Napier Conference Centre what it is today,” said Glenys Fraser, Venues Manager.

The 1995 refurbishment ensured the then named Napier War Memorial Conference Centre was able to cater for both conferences and weddings, the first of its kind in Hawke’s Bay.

Changing times meant the Conference Centre was no longer fit for purpose. A proposed refurbishment outlined in the Napier City Council’s Long Term Plan 2015-25 had a strong approval rating by submitters, and was brought forward to 2016-17 so as to combine with required earthquake strengthening.

The High Tea capped off a busy weekend for staff, who also ran an Open Day for the public, from 10am to 3pm on Saturday 1 April.