Penguins can't fly - or can they?

Three penguins from the National Aquarium of New Zealand have done something other penguins can’t – fly. 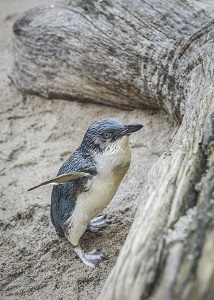 The three – two females (Pippa and Miley) plus a yet-to-be-named male – have been transported down to Christchurch’s International Antarctic Centre because Napier’s facility is too full.

“We’re licensed to hold 20 birds and we’re near capacity – which means we can’t take in any more penguins that need our on-site hospital care, and we can’t do any breeding,” explains Rob Yarrall, Aquarium Manager.

The National Aquarium is home to little blue penguins – or korora – the smallest penguin species and native to New Zealand. Some birds are bred on-site but most are taken to the Aquarium to be treated following injury, accident or attack. “We take in penguins with all sorts of issues – they might be blind, have their beak missing, or have been born disabled in some way,” explains Aquarium keeper Rebekah Cuthbert, who travelled with her precious crew to Christchurch today. “Once they’re fit and well, any bird capable of catching his or her own fish is then released.”

But for Pippa, Miley, and their little mate, a new habitat awaits. Ms Cuthbert says that the Antarctic Centre were delighted to receive a call from her, asking if they’d like some birds for their indoor/outdoor penguin viewing area. “Straight away they said ‘Yes, we’d love some!’ and we began making our arrangements to travel south.”

Ms Cuthbert says Pippa was born at the Aquarium, and is now one year old, while the other two are rescued penguins – Miley is aged three, and the juvenile male is six months of age. Asked whether she ever gets attached to her young charges, Ms Cuthbert says “yes, to some more than others, but I’m happy to see them go to their new home. I’m especially pleased that Pippa has thrived – she is one of the first chicks since the early 1990s that has been successfully raised to fledgling.”