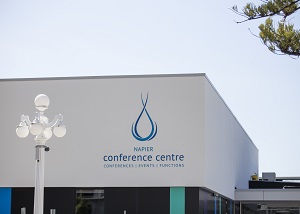 The fences are down and the finishing touches are being applied – the Napier Conference Centre is almost ready to re-open its doors following a multi-million-dollar redevelopment. A blessing of the new-look venue will take place early tomorrow morning, ahead of the first conference scheduled in the new-look Marine Parade building.

“The Napier Conference Centre is a much loved community icon of Marine Parade, and I’m sure anyone who sees it, whether from the outside or from within, will be impressed with the outcome of this major refurbishment.”

Several other special events will celebrate the facility’s re-opening, including an official launch on Thursday 23 March followed by the first of the Council’s Business Breakfast series featuring Annabel Langbein on Friday 24 March.

Mayor Dalton is encouraging residents, ratepayers and businesses to take the opportunity to take part in the Open Day on Saturday 1 April. Everyone is welcome to visit the Centre between 10am and 3pm to explore the new venue for themselves. Visitors will see the way the spaces can be set up for a wide range of purposes, for everything from conferences and business meetings to special events, weddings and exhibitions. The brand new Large Exhibition Hall will feature a trade show of businesses that work closely with the Napier Conference Centre on a regular basis, such as photographers, florists and equipment hire specialists.

Meanwhile, a fun campaign kicks off next week, in partnership with NZME and The Hits radio station. The search is on for anyone whose wedding was held at the venue during the last 21 years – or even earlier, when it was known as the War Memorial Hall. Winners will be invited to the ‘21 Years of Brides VIP High Tea’, a nod to the 21 years since the Conference Centre’s last major refurbishment was completed in 1995.

This latest upgrade pays homage to the original rotunda form of the 1950s Guy Natusch designed building, providing a state-of-the-art facility for the future while also respecting the past. The original War Memorial was built by public subscription in 1956, in memory of those who lost their lives in the Second World War. The Eternal Flame, part of the War Memorial that was originally located there, is currently being kept alight at a secure Council location until its new location is confirmed. The Roll of Honour listing the fallen soldiers’ names remains on the Centre’s website.

Investing in the Napier Conference Centre upgrade was supported by many submitters to the Long Term Plan 2015-25. Refurbishment was originally scheduled for 2023, but an earthquake strength report prompted a rethink by Napier City Council, and it was decided to combine earthquake strengthening, extensions and refurbishment work into one major project during 2016-2017. Now the work is completed, the Centre is set to continue to be an  important community asset for bringing people together for business and pleasure.

“This 1950’s classic, housing the great ballroom with its sweeping coastal panorama, is a landmark in Napier. We wanted to retain the essence of this experience, so the ballroom has been enlarged by pushing out this curved wall. With the addition of the brand new exhibition hall and an expansive glazed foyer there is a connection between old and new, past and present.”