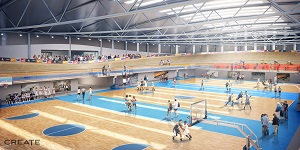 Napier City Council has made the decision to withdraw a paper seeking a resolution of council as to whether to proceed to the next phase on the proposed Hawke’s Bay Multi-Use Sports Facility.

Councillors met with Council management and stakeholders -  including representatives of the sporting codes who would benefit from the construction of the facility - last week, in order to discuss the project.

“It was a great opportunity to hear directly from our sporting community about what their needs and demands are,” says Mayor Bill Dalton.

“We talked through the opportunities the facility would provide the community – which obviously include modern indoor sports courts and a raised velodrome track, but also extend to administration space and retail opportunities.  It became clear, though, that this proposal has raised a number of questions in the minds of Councillors, and although the seminar answered many of those questions, there are still issues we need to explore before we can reasonably ask for a decision.”

A detailed business case on the proposed facility - peer-reviewed with the support of Sport New Zealand - was shared with Councillors and stakeholders at the seminar and is available to the public through Napier City Council’s website from Wednesday 22 February. The business case was set down to be debated at a public meeting tomorrow, but the paper has been withdrawn.

Sport New Zealand and Napier City Council are now working together on accessing the sporting body’s latest research and analysis on the future growth of sporting codes. This evidence will be shared with Councillors, to help ensure that a well-justified decision is reached.

“Making sure we have the right facilities to accommodate the current and future sporting desires of the Hawke’s Bay community is central to our investment decision,” says Mayor Dalton.

“It would be utterly remiss of us to move to the next stage and begin the detailed design work and funding acquisition for a multi-million dollar facility unless the Councillors, who are both responsible for assessing the viability of the facility and for representing the people of Napier, feel completely sure that the decision to progress is the right one. I’ve been impressed with our Councillors’ honesty and their due diligence, and I’m grateful to the team at Sport New Zealand who are making sure we have the best possible data to inform a future decision.”

“My message to the community now is, please talk to us. We need to understand your position on the Multi-Use Sports Facility – what the increased court space would mean to you and your family, whether you see the benefit in a velodrome for our region’s growth and how you see the project through a tourism and economic development lens. If you have a view, share it with your Councillor or share with me directly – because we need to get this right and serve the people of Napier in the best way possible.”

Mayor Dalton says an email address remains set up for public consultation on the proposal (and other sporting proposals in development such as the Napier Aquatic Centre renovation) at futureinmotion@napier.govt.nz. There will be “further opportunities to consult at the detailed design stage, should we reach it,” he adds.

Councillors will spend the coming months attending workshops on the Multi-Use Sports Facility, and further consultation with Sport New Zealand, as well as its regional arm, Sport Hawke’s Bay, is planned. The paper is likely to be brought back to Council later this year for a decision on whether to proceed.