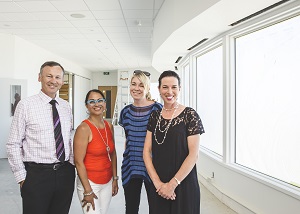 A new kitchen, new chefs and a whole new catering team is ready to roll up their sleeves and get to work when the Napier Conference Centre reopens.

Dish Catering has been awarded the catering contract for the redeveloped venue, due to open its doors again for business in March following a major refurbishment and expansion completed by Napier City Council.

A well-respected Hawke’s Bay company, Dish Catering was established by award-winning, chef Jenny Parton over a decade ago. The company currently has 60 staff and operates a commercial kitchen in Hastings and also oversees the kitchens at Red Barrel Vineyard, Havelock North and Church Road Winery, Taradale.

Jenny and Dish Catering Manager Rachel Lyons are excited to be part of the Napier Conference Centre’s future.

“We’re thrilled to have been given the opportunity to work from the new-look building in a brand new commercial kitchen - it’s a state-of-the-art venue in a stunning seaside location,” says Rachel.

The Dish Catering team has big shoes to fill, following in the footsteps of the venue’s departing caterers, Paul Cadigan and Donna Ransfield from Ocean View Catering. Paul, Donna and their team have provided delicious food for the past 21 years, ever since the facility underwent its last major upgrade in 1995. They decided not to tender for the new contract as they are ready for a fresh challenge.

”It’s been an enjoyable 21 years and we’ve lost count of the number of weddings, conferences and big ticket events we’ve looked after over the decades, but now it’s time for a change. We’ll miss working there – it will be the end of an era for us, but the beginning of an exciting new one for Dish.”

The Napier Conference Centre building was originally constructed in 1956, in memory of those who lost their lives in the Second World War. For many years it was used for a variety of purposes, then after a major refurbishment in 1995 it re-opened as the Napier War Memorial Conference Centre as a dedicated conference, event and wedding facility.

Napier City Council Venues Manager Glenys Fraser says the latest redevelopment has created a premiere conference venue, the only one of its size in Hawke’s Bay.

“This has been a significant Council investment in the region’s burgeoning business tourism industry. We already have strong forward bookings for this year and 2018. Long term all of Napier and Hawke’s Bay will reap the economic benefits.”