A new place to relax in the CBD 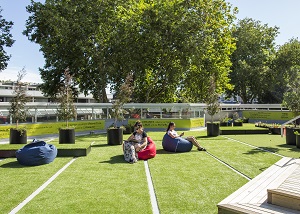 Napier Library now has its own funky outdoor pop up space.

The rooftop garden accessed from Level One of the Library has re-opened, complete with carefully chosen plants, artificial turf and furniture including colourful bean bags.

The project grew out of feedback from a 2015 survey by the Library, asking patrons what they thought the 360 sq m space should be used for.

“The vision was for a tranquil and relaxed space, where visitors could read and re-charge, eat their lunch, and connect to our free wifi from their devices. Judging from the response so far, I think it’s going to be a hit,” says Libraries Manager Sheryl Reed.

The pop up park will be open between 9.30am and 4.30pm weekdays, depending on the weather. The plan is for it to be open during warmer months.

The application of the turf was a specialised task conducted by Bay Reroofing Ltd, due to the constraints of the specialized membrane which seals the surface underneath the turf.

The plantings are a mix of New Zealand natives and aromatics, all chosen for their drought resistant abilities, attractive colours, textures, and smells.
There are also wall banners sporting literary and library-related quotations from various sources, such as Albert Einstein and Barack Obama, including an appropriate whakatauki (Maori proverb).

All library rules and health and safety considerations apply, including Napier City Council’s Sun Smart policy. Some sunscreen will be provided, but we encourage visitors to be sunsmart in other ways too, such as wearing hats. Children must be supervised at all times by an adult, and the roof garden is a non-smoking area.

The original rooftop garden was removed in 2008 for health and safety reasons.