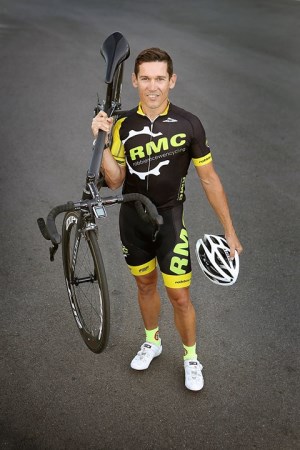 Cycling superstar Robbie McEwen says guests at the upcoming Legends of Cycling dinner, to be held this Sunday at Church Road Winery, are in for a treat – and plenty of surprises.

“You never know what I’m going to blurt out,” he teases, adding that cycling fans will hear “insights into what makes a pro athlete tick, as well as the psychological side of elite sport. I can’t give away much more until the night!”

The three time Tour de France green jersey winner – each a career highlight in Australian McEwen’s eyes – is in Hawke’s Bay for the duration of the Summer Cycling Carnival. He will take part in tomorrow’s i-Way Fun Ride as well as headline the VIP Legends of Cycling Dinner, being held here in Napier for the very first time. “I’ve heard fantastic things about Hawke’s Bay and I’m looking forward to discovering the cycling both on and off road,” Mr McEwen says. “I’m told it has the terrain to stage world class racing and the scenery to match, so I’m excited.”
McEwen, who has three children at home in Australia aged 14, 10 and six, says he doesn’t do as much training as he once had to, although running around with the kids keeps him pretty fit. “And when I’m home, which hasn’t been much this year, I’ll ride eight to 12 hours a week, about 200-300 kilometres.”

He’s a keen snowboarder, surfer and golfer, although cycling will always be his first love. “Cycling has taught me that perseverance and persistence pay off. It’s also taught me how to suffer… a lot!”

McEwen hopes the Summer Cycling Carnival endears the sport to newcomers, adding he enjoys watching the community getting involved in cycling. “Giving people a safe riding environment with good infrastructure, and getting motorists on-side is key to the success of cycling,” he says.

There is still a handful of tickets available to the Legends of Cycling Dinner, Sunday 8 January 2017. Go to http://legendsofcycling.co.nz/. For more info on the Summer Cycling Carnival including maps and road closures go to http://www.summercyclingcarnival.co.nz