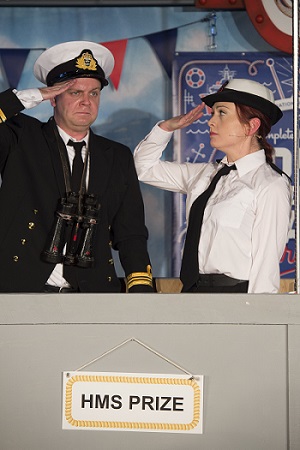 The Royal New Zealand Navy (RNZN) will celebrate its 75th birthday in style in Napier from August 24 - 26.

The RNZN, which has dubbed the overall celebrations 'Operation Neptune', invites people along to The Complete History of the Royal New Zealand Navy (Abridged), which creative director Mark Hadlow describes as “song, satire and silliness”. It’s a fun way to learn more about the Navy and the role it has played over the decades. Written by Gregory Cooper and directed by Hadlow, Abridged is an educational comedy that takes its audience through a fast-paced and interactive journey of the Navy through the decades.

Hadlow says the show is similar to theatre sports, never having a dull moment and involving the audience at every opportunity.

“Our goal is to engage and entertain our audiences and by doing that there’s a much greater chance of them learning new information about the RNZN,” he says.

The show will hit the stages of the Napier Municipal Theatre and MTG Century Theatre for three nights from 24-26 August. It is suitable for anyone aged between 13 and 93. Napier City Council is proud to be able to help the RNZN mark its 75th  anniversary. Its contribution includes the waiving of theatre hireage and the commitment of some resources to the production while it is in town.

While in town the Navy Players are also performing a free pantomime for primary and intermediate school children, called Commander Claire and the Pirates of Provence. The show has already been booked out.

“It is a wonderful occasion to give children the opportunity to see live theatre in action and learn about a significant piece of Royal New Zealand Navy history,” Hadlow says.

The plays are sponsored by Siemens. Chief executive Paul Ravlich said his company shared a long history with the RNZN, starting in the 1980s with the two original ANZAC frigates and continuing today with the delivery of benchmark technological upgrades to the ships.

“Now, as the Navy celebrates its 75th birthday, we are pleased to support the Navy Players Theatre Tour. I commend RNZN’s efforts to bring the heritage of the Navy closer to the hearts of people.”

All proceeds from the plays will go to local charities.

Tickets to The Complete History of the Royal New Zealand Navy (Abridged) are just $20 per person and are available from the Napier Municipal Theatre, 1 Tennyson Street, or by phoning 06 835 1059.