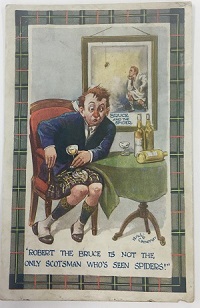 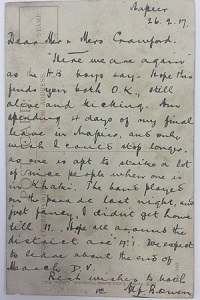 A mysterious vintage postcard that has made its way to Napier’s i-SITE is needing a home.

Penned by a World War One solider enjoying his final days of leave in Napier, the postcard is in excellent condition, having spent its recent history as a bookmark.  Mark Davey of Te Aroha found the postcard when it fell out of an old book, and as it was describing events in Napier, sent it to the i-SITE Visitor Centre in the hope that a local might know something about it.

The postcard is addressed to a “Mr and Mrs Crawford” and appears to have been signed by an “Alf Bowen”. It is dated 26 February, 1917 and reads as follows:

“ ‘Here we are again’ as the A B boys say. Hope this finds you both OK, still alive and kicking. Am spending 4 days of my final leave in Napier and only wish I could stop longer as one is apt to strike a lot of nice people when one is in khaki. The band played on the parade last night, and just fancy, I didn’t get home till 11. Hope all around the district are A1. We expect to leave around the end of March... Best wishes to both of you, Alf Bowen.”

Mr Davey says the postcard could spark a memory for a Napier local – equally, it could have been sent from Napier to the district in which he found it. He says his wife is a member of the Te Aroha Mountain Lions Ladies’ Club, who operate a book shop. “The book was one of a large number we collect from all around the district – Te Aroha, Te Puke, Waihi and Hamilton.”

He doesn’t recall the title of the book he found the card in, but says it was in tatty condition and therefore unsaleable. “The postcard just fell out.  I’d like to be able to help find relatives of the people mentioned in the card.”

Enquiries are also being made via the Auckland War Memorial Museum. If no family comes forward, the postcard will be passed to MTG Hawke’s Bay.

Anyone with any information can contact the Napier City Council Communications and Marketing team – comms@napier.govt.nz – or phone 06 834 4144