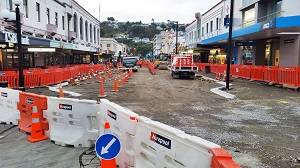 Good weather and efficient construction have helped speed up the pace of the Napier inner city infrastructure upgrade to the point it is now a month ahead of schedule.

As the above ground work comes to a close the security fencing in both areas will be replaced by barriers. Pedestrians and motorists can expect things to return to normal in the Stage Three area some time in the next couple of weeks.

Work has also begun on Stage Six, from the intersection to Shakespeare Road. This involves laying new stormwater pipes between Tennyson and Browning Streets.

Director of Infrastructure Jon Kingsford says due to the great progress in construction the redevelopment of Hastings Street through to Browning Street should be finished early next month.

“Since construction has been going so well, we’ve decided to push it a little further and carry out additional work in Browning Street, to capture more stormwater runoff from Shakespeare Road, in August and September.”

The Council will let the public and retailers know of any potential disruption to traffic flow in the area ahead of time.

The CBD upgrade continues the work which resulted in an upgrade of Hastings Street’s underground infrastructure, and the street surface between Albion and Emerson Streets last year. The above ground design elements include wider footpaths, a revamped parking layout, new planting and street furniture.

Planning for this part of the CBD infrastructure upgrade began in 2010. It is part of a city wide response to flood prone areas. All new pipelines will connect to the Marine Parade stormwater outfall, underneath the viewing platform.

For more information about the overall project, go to the Napier Inner City Upgrade project page.