A progressive action plan for Napier and Hawke’s Bay 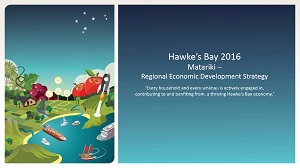 The National Aquarium of New Zealand is set to directly benefit from an “exciting and unprecedented boost”, says Mayor Bill Dalton, following the launch of Matariki - The Hawke’s Bay Regional Economic Development Strategy and Action Plan 2016.

The document and action plan were released today, with representatives from local and central government, iwi, government agencies and the business community gathered together at MTG’s Century Theatre to hear how two years of grit and graft had contributed to the strategy.

Among today’s key announcements, news that the National Aquarium of New Zealand will look to expand to become a state-of-the-art marine science facility, with the potential to develop new laboratories, attract greater visitor numbers and lead the way in marine research, in partnership with the University of Waikato.

“What’s remarkable about the strategy, to me, is how collaborative this process has been,” says Mayor Dalton.

“Many productive discussions have taken place at the Regional Economic Development Strategy (REDS) governance group table, over a period of two years, with many visions for a thriving Hawke’s Bay shared, debated and digested. I’m thrilled to see that all parties have found common goals and worked industriously towards them.”

Other initiatives include Project 1000 – an employment strategy to encourage growth in the horticulture and viticulture industries – as well as an agricultural training hub and business mentorship programme.

The overarching goal of Matariki is that the Hawke’s Bay region becomes New Zealand’s “most innovative” and the “leading exporter of premium primary produce, and a hub for business growth.”

Wayne Jack, Napier City Council Chief Executive and Chair of the REDS governance group points out that the document is “a living one – it may change, adapt and grow to meet the evolving needs of our region. Now, it’s time to take this action plan to our Councils where we will all work hard to adopt and implement these important goals.”