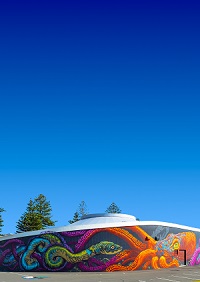 The awards, now in their third year, recognise and celebrate the outstanding leadership role local government plays within communities.

The Marine Parade Outfall and Viewing Platform is a finalist for the Chorus Excellence Best Practice in Infrastructure Management award. The city’s Sea Walls: Murals for Oceans project is also a finalist, in the Creative New Zealand Excellence in Best Creative Place category.

The outfall and viewing platform is a key part of the overall upgrade of the Napier Inner City stormwater network. Its fusion of functionality and aesthetic beauty has seen it swiftly become the most photographed structure on Marine Parade.

Judges praised the council for delivering an essential infrastructure project to such high quality, within budget and with a high level of community support.

The festival, previously run in Los Angeles, Vietnam, Mexico, and Sri Lanka, brings together renowned street artists from around the world to paint about relevant issues facing our shores and oceans worldwide. It resulted in 33 large-scale murals in the Napier CBD and Ahuriri.

Judges hailed the project for the creativity and excellence of the idea and its successful delivery.

LGNZ President Lawrence Yule said being named as a finalist is an impressive achievement especially considering the calibre of entrants this year.

“Local government is the lifeblood of New Zealand’s communities and makes contributions to people’s lives on a daily basis," Mr Yule says.

“These Excellence Awards are a chance to celebrate the great work of local government in helping shape the places we all live, work and play in.

“The 25 finalists have demonstrated innovative, courageous and creative leadership in work that provides strong benefits to community, economic development, infrastructure, the environment and arts and culture.”

This year saw more entries than previous years, including many exceptional projects, and Mr Yule said it was pleasing to once again see a number of smaller councils featuring among the 25 finalists.

Category winners will be announced at a gala dinner during the LGNZ Conference, to be held in Dunedin from 24-26 July, 2016.