Sea Walls: Murals for Oceans festival gets backing for 2017 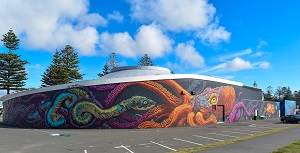 The success of this year’s Sea Walls: Murals for Oceans Festival meant Napier City Councillors had no hesitation committing up to $40,000 to the 2017 project at a meeting on Friday, 10 June.

The decision came towards the end of the second and final day hearing submissions to the 2016/17 Annual Plan Consultation Document. The Annual Plan will be finalised by the Council on 29 June.

Alternative Arts Initiative spokesman Cinzah Merkens, who spoke at the hearing, said organisers want to expand on the original festival, and are looking at including animation, performance, projection and music. They also want to engage with schools and believe it could become the biggest outdoor street festival in the country.

The Council was a major supporter of the inaugural event, which resulted in 30-plus murals by national and internationally recognised artists transforming walls throughout the Napier CBD and Ahuriri.

The Festival, previously held in Los Angeles, Vietnam, Mexico and Sri Lanka, is organised by international nonprofit PangeaSeed Foundation, raising awareness about the ocean through beautification.

Other decisions included committing up to $150,000 funding or in-kind support to next February’s Te Matatini Festival, in recognition of it being a significant national event. The Council was also supportive of the following organisations and their proposals; Te Mata Park Trust, the Hawke’s Bay A&P Association, and Zeal Education Trust. Council staff would also be investigating options for Waipatiki Beach Holiday Park.

Deputy Mayor Faye White, who chaired the hearings, says difficult decisions have to be made each year during this process, with so many worthy proposals on the table.

“We’re confident we’ve made the right decisions for Napier ratepayers and residents for this coming financial year, and pleased so many took the time to give us feedback or suggestions during this process,” Ms White says.

There were 227 submissions received this year.

As proposed in the Consultation Document, the Council also decided in favour of a Sustainable Capital Programme, committing to $59 million worth of funding for 2016/17, including $24 million worth of funding already under contract. The Embankment Road Bridge repairs will also go ahead, at a cost of $1.5 million over two years, the amenities, gardens and grounds of Anderson Park will be upgraded, and the Taradale Stormwater Upgrade will be put on hold for 2016/17 while further investigation of options is carried out.