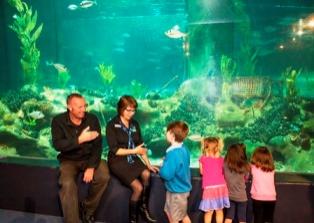 Monday, 9 May, saw the National Aquarium of New Zealand hold its first tour specially designed for the Deaf community.

The tour was supported by Deaf Aotearoa, which arranged for an iSign interpreter to be on hand to assist Aquarium staff.

One of their tutors mentioned how Deaf people sometimes felt excluded, often because hearing people were unsure how to communicate with them, Nicola said. “It got me thinking, could we do something more for our Deaf visitors?”

Regan led the first tour. “It gave them the opportunity to ask all sorts of questions just like everybody else, except in sign language,” he said.

Parent Andries Van Zyl said his children really enjoyed seeing the tropical fish and giant squid. Having a signed tour made it different to when he last visited the Aquarium two years ago.

Another parent, Amy Malin, said it was awesome to see staff members signing.

“I hope to see other places around here do this.”

The Aquarium may look at recording signed versions of its tours for use by the Deaf community in future.

Nicola hopes news of the tour will encourage other facilities and organisations to consider what they could offer. For example, offering basic sign lessons to their front-line staff, so they could sign simple greetings or phrases, such as ‘hello’ and ‘how can we help you’.’

“It would be such a welcoming gesture and I’m sure anyone who knows sign would really appreciate it.”

This year is the 10th anniversary of NZSL becoming an official language of this country. NZSL is used daily by more than 20,000 people, and rather than simply being a signed representation of spoken English, it has its own structure and grammar.

Note: Deaf with a capital D carries a lot more meaning - it refers to a cultural group whose members define themselves by their pride in being deaf and whose preferred or primary method of communication is a sign language. Deaf with a small d refers to the medical status of hearing loss.