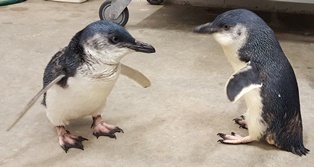 Meet Timmy and Tux. They are Little Penguins and best buds.

Timmy has spinal injuries and Tux was abandoned as a baby. They met in rehab at the National Aquarium of New Zealand when their chances of survival in the wild were slim to none, now they’re looking at a fulfilling life with 15 other penguins at the Aquarium’s Penguin Cove.

It is not uncommon for the National Aquarium to take animals in for rehabilitation but Timmy and Tux’s stories are quite unique.

Penguin Keepers, Sonja Murray, Steven McQuire and fellow keepers have fed and nurtured the chicks since their arrival and have noticed great improvements in their health and mobility already.

“We’ve pretty much taken on the role of mum and dad to the chicks,” Sonja says. “They follow us everywhere, just like kids do! It’s been quite an experience raising them from such a young age.

“We suspect Timmy’s spinal injuries happened when he was very young when his bones were still soft, although we can only guess. Tux, on the other hand, seems to have been a “runt” – he was born late in the penguin breeding season and was under-weight when he came to us – he even still had his baby down.”

Both boys have recently been on a trip to Massey’s Wildbase Vet College in Palmerston North for -X-rays, testing and rehabilitation.

Timmy and Tux have both been slowly introduced to the other 15 penguins in the Aquarium’s Penguin Cove. The introduction to the water in the cove will also help their feathers adapt and become water proof.

Unfortunately neither of them will be released back into the wild. Due to his spinal injuries, Timmy wouldn’t be able to keep up with the physical demands of hunting food for 16 hours a day like the average penguin does. And Tux, having been so young when he arrived at the aquarium, knows no other habitat apart from that of the loving arms of “mum and dad”.

“They’re happy little penguins and I think they’re pretty pleased to be where they are,” Steven says.

To meet Timmy and Tux, and their friends in Penguin Cove, check out the National Aquarium’s website www.nationalaquarium.co.nz for feeding times and close encounter opportunities.