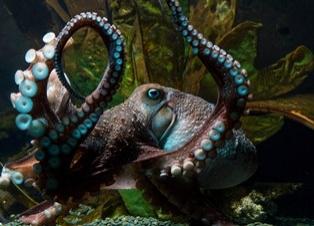 After making a bold escape from Napier’s National Aquarium of New Zealand, Inky the octopus has become a global superstar.

Inky, a common New Zealand octopus, has become one of the world’s most famous animals since news broke on Tuesday of his successful escape.

Napier City Council and Aquarium Manager Rob Yarrall has been fielding media inquiries from all over the world ever since, rivalling the amount of international coverage the rescued penguin ‘Happy Feet’ received back in 2011.

It is believed Inky, who was about the size of a rugby ball, climbed out of his tank late at night, found a drain, squeezed himself through a 150mm wide pipe and returned to the ocean.

He’s made headline news on many of the world’s top news services including the New York Times, the Daily Mail and the Telegraph, featured on CNN and BBC News and his story has been translated into several languages.

“It’s pretty full-on. It’s safe to say Inky has gone completely viral. Maybe he heard about one of the stars of Pixar’s upcoming film, Finding Dory, is an octopus called Hank, who is apparently an excellent escape artist too.”

Ms McLean said staff first noticed Inky had made his escape when they arrived at work one morning three months ago. The lid on the top of his tank had been left slightly ajar and Inky had made the most of the opportunity.

“There was a wet streak across the floor in the direction of a drain pipe which went out to the Pacific Ocean.”

Inky has shortened limbs due to fighting with fish on Pania reef, so it is possible someone out there may see him again because he is quite distinctive.

“But Inky really tested the waters here. I don’t think he was unhappy with us, or lonely, as octopuses are solitary creatures. But he is such a curious boy. He would want to know what’s happening on the outside. That’s just his personality.”

Because octopuses have no bones they are able to fit into extremely small spaces. They are very intelligent and capable of using tools.